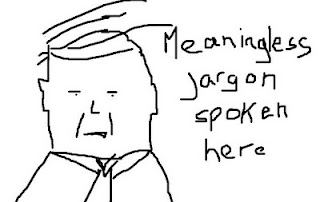 In my office we no longer increase our sales, we drive them. And it's been years since we compared anything, preferring instead to benchmark before engaging with customers – usually to discuss our learnings.

Jargon is common in the workplace, and as a writer I am probably over sensitive to it. In truth most managers know it for what it is - when I was a trainer I used to get work groups to play buzzword bingo and it was always taken as good fun.

Yesterday I came across this website which made me smile. On the first page alone I particularly liked Alpha Geek as the new name for head of Information Technology, and adhocracy, for minimally structured business where teams operate as needed. If you work in an office, I defy you not to laugh.

Jargon shouldn't be confused with technical language. We need this to be specific without being verbose. So poets talk of a villanelle and not a verse with a dual rhyming scheme in which the first and third lines of the first stanza are rhyming refrains that alternate.... In kayaking we use terms like Bow Rudder of Cartwheel; music has its equivalent terminology as have thousands of other activities. These are precise and technical words – they might be unrecognisable by outsiders, but they are not jargon.

Neither too is jargon the same as shorthand, or slang. The other day on a bird watching website there was talk of an Unstreaked Acro – after much searching I realised this referred to an un-marked Acrocephalus Warbler, a rare aberration of a species. Similarly the birders in Pembrokeshire talk of Manxies (Manx Shearwaters) and Ring Tails (young Hen Harriers). There phrases are irritating and cliquey at times, but they are not fully fledged (ha ha) jargon.

Jargon is lazy and imprecise. Whilst the speaker may know what they mean, they are assuming everybody else does too - and in making that assumption they usually omit vital information.

Take for example the trend in our office to engage with clients, or even worse, to interface. Of course, I know this means we have had some sort of discussion. But are we at the early stages of negotiations, or are we nearing Heads of Terms? Are the discussions going well, or have they stalled over commercial differences? Simply saying we are engaged gives me none of this important information. It's the same with driving sales. How are we planning to drive them, in what direction and by which route?

Jargon is part of office life, and it doesn't pay to get overly snobby about it. But it's important to be on our guard, especially outside the workplace. For in the hands of politicians, bankers and the like, it is a powerful tool for avoiding commitment. Jargon allows politicians to give the impression of having answered a question, when in reality they've told you very little and made themselves look smart in the process. And believe me, there is a whole army of spin doctors – both corporate and political - who make a living out of scripting this bullshit.