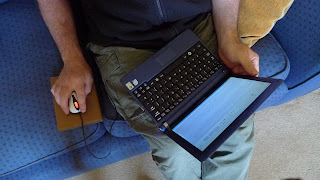 I am typing this post in the car as Jane drives us for a weekend in the Peak District. I'm using a Samsung notebook which cost less than £300 and has more computing capacity than had my company's mainframe of not that long ago. I've checked my emails, replied to some comments on the blog, transferred some cash between bank accounts and replayed the video of Dylan that I edited last week on this same machine: stunning.

I love computers. Without my PC I would not be interested in, or much good at, writing; I would read less, have fewer friends and be required to go Christmas shopping on a weekend. On a more serious level I would have little or no access to news and information other than through the popular media. And as for reference, if I was lucky, I might have a set of dusty encyclopaedias, decades out of date. The chances are you feel the same because you are reading a blog – and we've all come a long way since people thought using the internet to research an essay was somehow cheating.

Fourteen years ago, I was 'volunteered' for a study tour in the US. The brief was to research newspapers on the internet and write a report on its implications for the UK. I went to visit Apple and Microsoft as well a dozen newspapers that were pioneering online news and bulletin boards (does anyone remember those?). At that time, computer ownership in the US was nearing 10% of households, and cutting edge performance meant a dial up modem and a browser called Netscape Navigator.

When I returned from the States I wrote my report. Nobody took much notice, which was probably just as well. Even my better projections have been surpassed many times over. I remember how experts at the time were predicting computer ownership might one day be as high as 30% of households. And mainstays of today's internet were simply not contemplated: my boys barely function without Wikipedia, eBay and Facebook. It says something about the speed of development that as I typed the last sentence my spell checker recognised Wikipedia and eBay but not Facebook (I'm using Word 2007).

'Where will it all end,' is a common refrain of my father in law. I have no idea – my experience in the States taught me not to predict too far ahead - the only certainty it seems is that technology will take us further than we expect and more quickly too. Whatever happens I hope to embrace it – indeed it is one of my ambitions to become a sad old git who is also a whizz on whatever gadgetry we have by then.

That juxtaposition probably sums me up. I've spent all week at my PC but this weekend I want to walk on the moors; I want to go climbing with my son - to let him touch and smell the same Derbyshire gritstone that was such a part of my youth – and I don't want technology to dull the experience. Blogging in this context feels like an intrusion.

Maybe that feeling offers us the best clue as to the true limits of technology. For I suspect it lies more in our values and desires, than in the constraints of processing power or designers' imaginations. Despite my love affair with computers, there are times when I simply want a break.