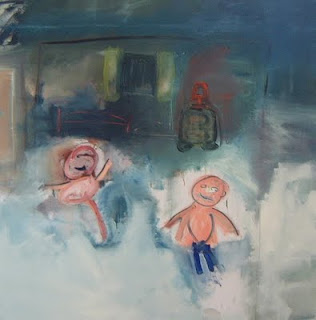 Bedtime - uncompleted. M Charlton circa 1992
Remember remember the fifth of November
Gunpowder, treason and plot.
I see no reason why gunpowder, treason,
Should ever be forgot.
I've never been a fan of Guy Fawkes Night. When I was a child it marked the start of winter, the dark nights and the prospect of snow. Living in the North East, snow meant long days locked in the house with little to do, and my mother urging silence in case we woke up Dad. There seemed little to celebrate in that, but there was more to it.
My father was a policeman. To him, fireworks meant 'trouble'. They were something the 'bad lads' played with; they were synonymous with delinquents and hassle - bangers! were the stuff of demons. Short tempered at the best of times, my father would become fractious as the day neared; you could feel the tension building, for all the wrong reasons.
It would have been better if he had simply refused to play along. But perhaps feeling he ought to make an effort he would buy the smallest box of Standard Fireworks and we'd huddle in the garden to watch the 'show', before he went to work. I remember once, he lit them all in tandem - we were back in the house within three minutes!
As a teenager, fireworks ranked alongside cigarettes and cider as something you hid from your parents. For a few years they held a certain rebellious fascination; we'd go down the beach and set off rockets and occasionally try our hand at home made incendiaries. But always a sense of guilt remained; I could never bring myself properly to join in the fun.
Once, travelling on a bus with some friends, they let off a fire-cracker concealed in a cigarette. The bus driver thought it was an arson attack and drove immediately to the police station - where my father was on duty! I walked off the bus with most of the passengers - to be fair, I had taken no part in the prank - but two of my friends were dragged into the station for questioning and a stern caution. For weeks I was convinced my father would find out; I'd been with the 'bad lads', playing with fire.
Playing with fire: that's a phrase which makes me uneasy too. When I was very small - about seven I think - my father beat me and my brother so badly we were kept off school because of our bruises. Our 'crime' was playing with matches. I often wonder about that incident - for it was around that time there was an enormous fire in a department store in Newcastle; my father had been one of the officers in charge, it was huge event and he felt the strain. Soon after he had what I now realise was a mild nervous breakdown. Bonfires always brought back memories.
I still feel uneasy over fireworks. The new super rockets and huge display packs are somehow too grand. I can't help but think of them as a vulgar waste of money in a world where people are starving - I know that's a touch pompous but it is how I feel. And at the other extreme, sparklers never deliver on the promise of their name - smiles fizzle out before the flame dies and I constantly worry the kids will burn their hands. Of the few fireworks I did like as a child, most are now illegal: does anyone remember London Lights (a sort of bright match which burned a fierce red) or Jumping Jacks or Chinese Crackers.
My sense of guilt has some echos in the Powder Plot itself - after all, Mr Fawkes and his associates went to the Tower for their crimes. There is also a certain symmetry in that the perpetrators were Catholics, who stereotypically carry guilt as if it were a matter of faith. It took the Establishment 200 years or so to forgive them their conspiracy - we still won't contemplate a Catholic monarch. So perhaps I am not entirely alone in my unease.
That said, the concept of blowing up parliament and most of the aristocracy has its appeal...
Posted by The bike shed at 7:31 PM