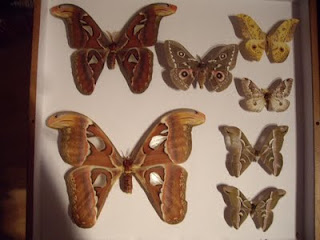 Silk moths
Why would a grown man collect moths? Why not, I might reply. A less defensive answer would be so say that I don't as much collect them (at least not any more) as I own a collection. This is an important difference. As indeed there are differences between types of lepidopterists.
I suppose your traditional collector is one who spends the dark hours setting up light traps, recording catches and taking selected specimens for their collections. They buy gruesome looking equipment from suppliers like Watkins and Doncaster (The Naturalists) and while away the winter hours pinning, setting, labelling and cataloging their quarry - all the while fretting over the relative merits of British Entomological Pins verses their longer Continental alternatives. I know all about this type of collector, because a few years ago I bought a lot of second hand equipment to, ahem, amuse my boys.
Then there are the 'breeders' whose interest lies chiefly in raising live specimens from ova (eggs to the rest of us) through to larvae (caterpillars), then pupae (chrysalis or cocoons) and eventually the imago (adult moth). Sometimes this process takes a few weeks, sometimes years, and it can involve, in various measure, heat lamps, breeding cages and furtive raiding of the neighbour's privet hedges. I know all this because a few years ago I bought some livestock to, ahem, amuse the boys.
Believe it or not there are thriving internet groups who exchange livestock at reasonable prices, sharing equipment and breeding tips. Occasionally I receive urgent email alerts for surplus livestock, or rare plants as some poor member is losing sleep over his diminishing supplies of eucalyptus gunnii. I know all this because I still subscribe to a newsletter which used I joined to, ahem, amuse the boys. (Slight aside here but there is a regular advert in one newsletter for a book with the fabulous title of Fangs For The Memory: Travels of a Tarantula Collector - makes me laugh every time) 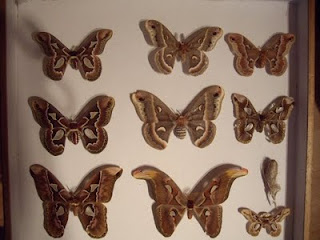 silk moths
Alright, I admit it, I'm interested in moths; butterflies too if you must know. Quite why, I don't know. Always have been I suppose, though it became more serious when I was about twelve years old. I used to go out at night and watch them circle round the lamps in the streets near our house; I used to go to the Hancock Museum in Newcastle and ask to look at the back room collection; I used to order the larvae of exotic silk moths and rear them to adults specimens and sell the ova to other collectors; twice I went to London the amateur entomologists collectors fair. I did all this and more - and then I stopped. 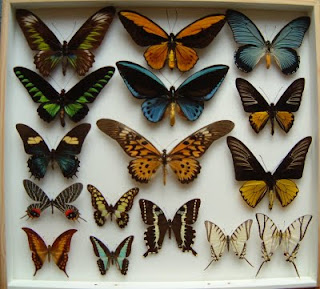 Butterflies, various - large one's are known as Birdwings
In fact, I stopped for nearly thirty years - until my boys were in junior school and they said, 'Do you know where we can get some really big creepy crawlies, Dad?' So we went back to that same annual exhibition and it was all still there! The dealers, the collectors, the men with magnifying glasses, the moth trap suppliers, the youngster's bug-club, the stick insect group, the coleopterist group, the exotic livestock group, the photography group - the whole cornucopia of British eccentricity at its best.
We were under strict instructions (ignored) not to bring back anything which was alive. As it was we managed a selection of caterpillars, and two fierce stick insects that survived for years and we nicknamed Terri and Terrilina - they used to attack anyone who tried to go near them. But my prize purchase was a collector's cabinet full of exotic set specimens which cost me £500.
Why did I buy the cabinet? Because it was there and because I'd always wanted one. And, I suppose, because it reminded me of my youth. A year later I returned and bought a second, which I filled with silk moths - some that I'd kept in boxes since I was a boy. 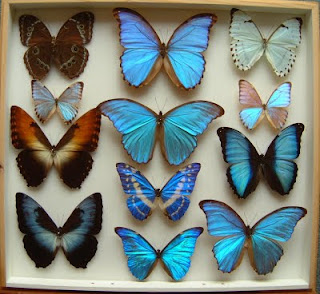 Morpho Butterflies - 'The big Blue Ones'
The collections have no practical purpose; I don't spend hours cataloging or adding to them; I just like them. Dylan comes to look at 'big blue ones'; visitors occasionally like to gawp at the twelve inch Atlas Moth - but aside from that the cabinets stand untouched by anyone but me. Even I don't look at them very often - mostly just to top up the protective naphthalene; it is an in joke amongst entomologists that the biggest threat to their collections of dead insects is living ones. I like to think the naphthalene gives my study a Victorian air; Jane tells me it is musty, bordering on the creepy. Oh well, each to their own.
And rightly so. I think it is good to indulge ourselves occasionally. My wife likes clothes; my boys like gadgets, Dylan likes toy trains; I like moths, and lots of other things too. I suppose most collections (or hobbies for that matter) could be regarded as frivolous or nerdy. But I think that view misses the point; we enjoy them in themselves, and the best collections give us pleasure beyond any intrinsic worth or purpose. Despite having looked at thousands of moths, each time I open the cabinet I still get a sense of wonder. 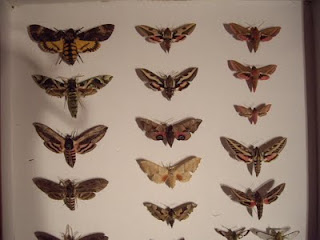 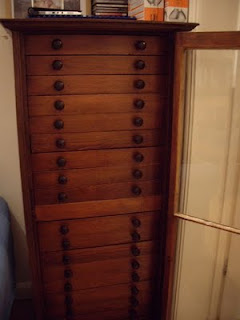 Victorian collector's cabinet
Posted by The bike shed at 7:13 PM