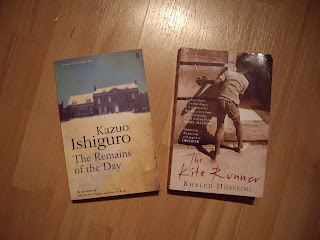 The summer is often a good time to catch up with reading, but somehow it didn't happen this year. Something about the rain perhaps, and too much work and a five year old who wants constant attention... Nonetheless, my theme of quality not quantity has definitely applied to those books I did find a moment for.
Robinson Crusoe had plenty of time on his hands: twenty five years of it in fact. Which is about as long as I had put off reading this classic. It was not at all as I expected. There are long sections where not much happens; a great deal of contemplation on the 'lot of man' and then the occasional wildly inaccurate assertion which made me laugh- I saw lions and tigers and all sorts of wild beasts on the beach of Morocco. Mmmm, did you now.
And then there were other surprises: Friday's father who turns up on the island; the dozen or so other shipwrecked sailors; Crusoe's trip through France on his return, chased by ravenous wolves - he wasn't luckiest of fellows. Reading the original reminded me how so often we think we know these stories, when what we actually know is the dramatised versions from TV and cinema.
Kazuo Ishiguro's, Remains of The Day is another book adapted to the screen, though I have never seen the film; indeed, Ishiguro was a chance discovery - and one I'm delighted to have made. Remains of the Day is the story of a butler who reflects on his life of service and dignity; it is one of the saddest and most introspective books I've read since Sandor Marai's Embers. It is also the most enjoyable book I've read this year - absolutely my kind of thing, about which I shall explain later.
Not so The Kite Runner by Khaled Hosseini. There is no doubt this is a good read; I finished it in a weekend, which is very quick for me, and I can see why it has sold 8 million copies. But, to my mind, it isn't that good; it is also a perfect example of what I like and dislike in a novel, displaying both qualities in equal measure. Warning - skip the next two paragraphs if you haven't yet read the Kite Runner but plan to. It's worth a short diversion to consider this.
I like novels that make me think; I like sensitive writing, where the words really matter and the process of reading gives you something back, almost like poetry. And I admire this over and above any narrative content, hence I often say that I like books in which 'not much happens' In parts the Kite Runner does this well, especially in the character of Amir and his struggle to forgive himself his childhood cowardice - and later, his search for redemption.
Sadly, what I most dislike in novels, the Kite Runner has in abundance too. In particular, an over contrived and rounded plot. Loads of books seem to do this; a kind of literary deus ex machina which borders on insulting the reader's intelligence. That's a bit harsh for it is largely a preference on my part and I know that many people enjoy the intricacies of plot as a key feature of their reading.
But to my mind... It was just so predictable that Amir's father would risk his life to stop the rape of stranger when, years earlier, Amir had failed to intervene to stop the rape of his best his friend . And it was equally predictable that the raped 'friend' would later turn out to be Amir's half brother... Then at the denouement, the villain in dark glasses just happens to be Amir's childhood nemesis who had raped his half brother all those year's ago... And as if that's not enough, Amir is finally saved from death by his half brother's surviving son - in a mirror image of the events thirty years previous, right down to the same slingshot in the eye!
And that's ultimately what I most dislike; this plot and counter plot, interwoven to form a perfectly unbelievable tapestry. To be fair Hosseini is not alone in this tradition. Consider the ludicrous plot of Jane Eyre, in which the heroine flees from Rochester, and ends up starving, hundreds of miles away in a remote woodland, only to be taken in by a family who, so it transpires, are her long lost cousins! 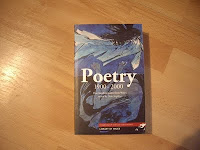 But back to my reading list. I've enjoyed Anton Chekhov's The Wife and Other Stories. Raymond Carver was a great admirer of Chekhov, so I suppose was always going to like these. Again, not much happens, and yet everything does.
I have also enjoyed the Library of Wales' new Anthology of Welsh Poetry - a doorstop of a book, and a bargain at a tenner. This one will stay by my bedside for a while yet. 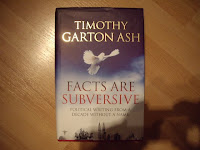 Tim Garton Ash is a writer I much admire. He embodies the idea of a liberal, intelligent, well researched commentator; he is engaging too, making difficult topics interesting and covering ground that newspapers seldom go near. His recent collection of essays, Facts are Subversive, is especially strong on the revolutions, conflicts and development of Eastern Europe since 1990.
If you are anything like me, you know the general story of these events, but lose it when it comes to the detail. It all tends to merge together: Berlin, Poland, Bosnia, Serbia,Ukraine, Macedonia... And yet the fall of Communism is arguably the biggest political change of the last sixty years!
Reading this book I realised that what little I knew of it was from the media, just like I only knew the TV adaptations of Robinson Crusoe. Garton Ash will not be the last word on the subject, but I'm glad I didn't put off reading this book for quite so long.
Posted by The bike shed at 8:54 PM