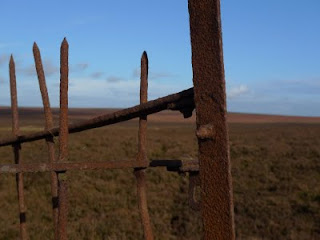 We are at Burbage Edge first thing on Saturday morning. It is bitterly cold, the palest of blue skies with heavy clouds scurrying over from Edale. A slow trickle of climbers leaves the lay-by, the collars of their jackets pulled high against the wind.
We walk down the track, passing the climbers huddled under Little Wall and Triangle buttress. They are uncoiling ropes and blowing into cupped hands. The path is wet, the puddles mirroring the sky as the sun brightens and the bracken glows in all its chestnut glory.
I feel an acute sense of awareness, as if every step is one I've taken before: the peat as it squelches underfoot; each gritstone sinking into the mire; the trickle of the stream as it runs under the track.
As the track passes below the far end of the cliffs that climbers call Burbage North, I strike up the hillside and call to the others to follow. Dylan is whinging with the cold, but we cajole him on. 'Let me show you something,' I say. 'Something your Dad did long ago'.
We clamber up the boulders, under stunted trees and over grassy ledges to arrive beneath a steep buttress. The rock face is still cold but it is drying in the sun; a fissure in the lower wall oozes a green slime. 'This is Long Tall Sally,' I say, one of my better climbing efforts.
Mike looks at the blank slab and I explain how the route is climbed. It means little to him. In truth, I can't remember much, except a delicate blend of friction and bottle. I try the starting moves and get nowhere. Dylan follows me up the lower ledge and I worry he will fall so I retreat ungracefully but with thanks. By now the cold has crept inside our hats and coats.
We climb to the top of the crag. Jane gets stuck in a shallow gully, so I give her my hand and pull. We ought to go back, she says, if we turn now the wind will be behind us. I want to go on, further into my past, but I know the others don't share the enthusiasm. Dylan gives me a look that says 'carry please', so I distract him, telling him that somewhere near here is lion's cage; if he runs fast he might find it. 'You're tricking me again,' he replies.
As we near the road, there is shallow boulder on the moor to our right. It is about twenty yards off the path. I have an urge to go over and follow a sheep track through tussocks, stumbling as my boots catch the heather . A grouse panics and flaps skyward in flurry of feathers. I hop onto the rock, look across towards the car - and there it is!
'It's the lion's cage,' I call. 'I knew it was here; come and see, come and see.' Jane and the boys make their way to the boulder - still unbelieving - and I run off ahead, eager to get there first.
The 'cage' is a square of iron railings that stands isolated on the moor. It is silhouetted against the now cobalt sky. My heart is pounding as I slow down for the last few steps and let the memories flood back.
Somewhere in my albums I have a photo of me and Ken and Simon, each of us clinging to bars, pretending to be monkeys - it had been cold that day and none of us fancied climbing. I remember how it took an age to set up the shot using a self timer, and the walkers who passed by, staring at us as we hooted and screeched. I am laughing as I arrive at the same place, twenty five years later.
The cage is no longer complete, the rusted gateposts unsteady to the touch, the bars twisted and flaking. But its basic structure is still there. I pick up a run of fallen railings and hitch its end over one of the iron spikes that remain standing, pressing the other deep into the peat - the new fence holds. Dylan runs over, 'Let me inside,' he calls, 'I want to be a lion too.' We play, chasing each other round this strange edifice, jumping between the rails as Mike pretends to be lion tamer.
I have no idea why the 'cage' was put here; it resembles a grave, but surely not. There is a deep hole in its centre - a flagpole or a mast perhaps? It was old and rotten when I first came, now it is barely clinging on. Yet it retains a certain magic, a sense of incongruity in this bleak and beautiful landscape. It is beautiful in its own way too; the rusting iron somehow harmonious with the peat, the bracken and the flapping grouse. 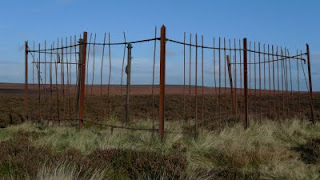 We finish our game and walk back to the car. The others pile inside as I search though the bags to find my camera. I run back over the moor to take some photographs, sinking my foot in a puddle as I crouch down for a better angle. I reel off a dozen shots before turning to the car.
A few yards later I trip over my lace and land face first in the heather. As I tie it again, the brackish water is squeezed from the nylon cord and trickles into the peat.
Posted by The bike shed at 12:07 AM