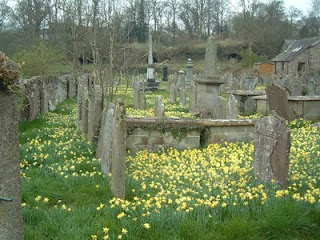 On Saturday morning we are driving past a churchyard. Dylan asks, 'Why do they put persons in the ground when they die?'
I tell him that people like to remember their family, and a grave is a special place to do that.
'But they can't see them anymore,' he replies.
I concede as much.
'Or touch them.'
No.
'Well I don't want to be in the ground...'
Dylan ...
'...In a box'.
Look at the lovely tress, I suggest, my voice faltering as I drive a little faster.
**************
In the bottom corner of this blog there is a list with the title of Room 101. It is my light hearted take on the TV show of the same name. I could no doubt add to the list many times over.
But readers of George Orwell's 1984 will know that the original Room 101 was something more sinister: it housed our deepest fears. Do it to Julia, cries Winston Smith when confronted with a cage of rats. His will is broken, his resistance dissolved.
If my list were to follow the book and not the TV programme, it would have one entry: the premature death of my children. I can think of no greater horror, and no circumstance that could redeem it. To say, I would rather die myself, is an inadequate cliche for a visceral fear that is beyond my words.
Returning to Dylan's comments on graveyards, he was soon distracted but my mind couldn't shift the thought. I recalled a series of poems by John Latham that are amongst the most moving verses I have ever read.
I met John on a course in 2007; he is an intelligent and sensitive man, a scientist and a fabulous poet. In 2000 his son, an adult by then, suffered a fatal asthma attack; John found his body the following morning.
In response to his loss John wrote a series of poems, later published in the collection Sailor Boy. He read us one poem that describes his fight to resuscitate his son - it is written as a conversation, and I remember how he raised the lilt of his voice as he spoke on his son's behalf, RelaxDad, Game's lost...
The poem moves between time and memory; I can't imagine how he found the strength to read it aloud.
Not Playing Dead
I'm more easy with your body
than for thirty years.
I'd toss you to the ceiling,
twirl you, pull you down,
you'd pin me, I'd play dead.
Now, it's you who fool with me,
you loll, a floppy doll
as I kneel between your feet
squeeze and thump your chest
beg you to fight with me.
It's too one sided to be true.
But in my head you're saying
Relax Dad, games's lost now,
though keep on if you wish.
As if, from some pale twilight
that thickens as you cool
you sense that I'll be glad
we had this wrestling match,
this closeness in my failure
to make you breath again.
John Latham
Posted by The bike shed at 6:33 AM

Labels: About me, November