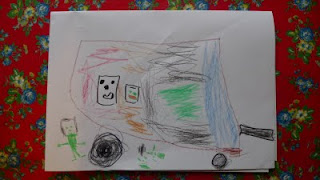 Our car - by Dylan
There is an ongoing joke at work about me and cars. According to my colleagues, the only thing I'm interested in, is whether or not it has a roof rack. This isn't entirely true, although roof racks are important if you variously need to transport kayaks, bikes and roof boxes. In fact, I have quite a number of considerations; it's just that few of them would matter much to my executive colleagues for whom image seems a lot more important than practicality.
So what exactly, would be my perfect car?
Well for a start it needs to be roomy; I have two teenagers with an immense capacity to spread themselves, and a four year old who requires all the usual toddler paraphernalia. Add the camping gear, the bikes and I suppose we are talking about a people carrier. Sliding rear doors are a must and, yes, a roof rack - and not one that requires you to buy the manufacturer's fittings. Thule roof racks are way the best and I want to be able the transfer the ones I've already paid a small fortune for.
As it's a people carriers, I expect it to have individual and removable rear seats (I'm not very bothered about seats number six and seven which tend to sit in my garage anyway) But here's the very important bit - listen up manufacturers - I want the seats to be on runners so I can position then far, far back in the car - far enough to give a six foot teenager enough legroom to lounge to his heart's content! You might think this wouldn't be too much to ask, but there isn't a car on the market that allows for this. There are any number of people carriers with two seats in the far rear, but not three - it's something to do with the wheel arches evidently. Just sort it please.
And some other things. I want the air con to work in the back of the car too. I want a twelve volt socket for every seat so there's no squabbling over the ipod, DVD, Gameboy chargers. I want the floor to be rubberised for easy cleaning, and a set of removable carpets that can be disposed of about once a year at reasonable cost. I want the seats in a washable fabric; I want a decent sized waste bin (between the front seats perhaps) and I want a the storage lockers to be large and simple. I don't want miniature cup holders, boy racer gadgets, cigarette lighters, fancy dials and those fabric storage pockets that are just perfect for food litter.
A few minor tweaks: an extra rear view mirror (sometimes called a conversation mirror) to keep an eye on the little darlings; a speed limiter to stop me falling foul of Gatso cameras; a system for adjusting seatbelts for little ones - all nice, but not essential. If the front seats swivelled round 180 degrees for picnics on wet days, even better.
And as for the boot. Can I please have a washable liner that fixes with Velcro to keep the mud / sand at bay. I'd like a clip in electric coolbox that is big enough to hold two bags of shopping. And I'd like one of those hoses that come in Range Rovers for washing wellies.
Typical, I've not mentioned the engine yet. I don't really care, so long as it's economical and adequate; I'd rather it had low emissions that a high posing value. And certainly nothing that could ever make me say soemthing like, I've got a 7 series but I'm changing it for CX300. What does all that mean; who cares?
That's about it. Apart from the seat configuration, you can get any one of these items in lots of different cars, but not all of them in any one. I find this surprising because it's not exactly a demanding list. Sadly, it reflects how little attention manufacturers pay to practical family needs.
Car design and marketing is so dominated by image that for many people their car is fundamental to their sense of self worth. You can have any amount of meaningless sporty variations - but ask for an integrated coolbox and that's way too difficult. It seems that our technology has come a long way from the Deux Cheveux and the Volkswagen Beetle (the original people's cars), but in family terms, we've not gone quite so far.
In the meantime, it's windy again, so I'm going to polish my roof rack.
Posted by The bike shed at 3:28 PM