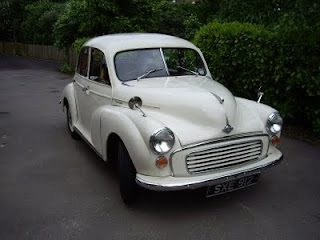 Can you have a collection of one?
I'm going to include my Morris in the collections series as it's the third one I've had and because my blog follower Pinkfairygran (what a great name) asked me to post a photo.
It's a nostalgia thing really. I had my first Morris was when I was a student; we shared it between a group of us and drove it to parties and cimbing trips that were a comprehensive education in every sense. My second I bought in my early thirties; I sold it when Daniel was born and always regretted letting it go. The current one I bought three years ago: it will be cheap to run I said; no road tax; minimal insurance... I didn't mention the upkeep.
The car has bit of a sad history. An old gent renovated it from scratch. It took him ten years, but just as he was completing the final paintwork he died. I bought the car off his widow. It is a 1956 split screen, originally with an 800cc engine but since upgraded to a newer model. And that's about as far as I go with the technical stuff.
The car still has its original seats and probably the roof panels - oh, and the trafficators. Otherwise, almost everything in the car has been renewed. Except the smell - why do all Morris Minor's smell the same no matter how much people do them up? This puts me in mind of the Ship of Theseus which throughout its many voyages had every part replaced - was it the same ship which returned? - a classic philosophical puzzle of personal identity (you knew I'd weave some ideas in somehow).
On the subject of personal identity, Dylan thinks it is very cool. The big boys call it 'that silly thing' and won't be seen near it unless there is absolute certainty that no friends will spot them. I tell them it's retro chic but they won't listen. Just wait till they learn to drive and I tell them it's the only car I can afford to insure in their name. 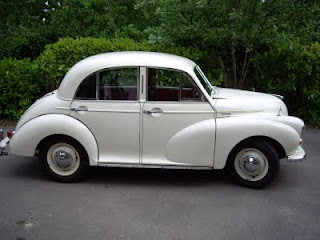 Generally, people's attitudes to the Morris are kind. You get more waves and hoots than frustrated honks because you are going slow. Some years ago we took our old battered old Morris (number 2, now sold) to a society wedding - the car park was full of Mercs and BMWs; but it was our car which everyone wanted to look at. More recently I stayed at the Castle Combe Manor House and had great delight in handing the car jockey my keys; he returned a few minutes later, 'How exactly does Sir start his vehicle?'
So that's my Morris. The truth is, I bought it because I could and because sometime we need to treat ourselves. Today I'm going to drive it to the Nevern Show, where I'm planning to meet up with Preseli Mags - my first encounter with someone from the blog world. Agricultural shows have always been designed as meeting places, so I think the show's founders would have approved - and I bet they would have liked the Morris too. 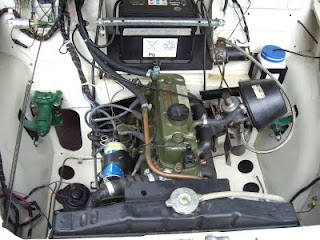