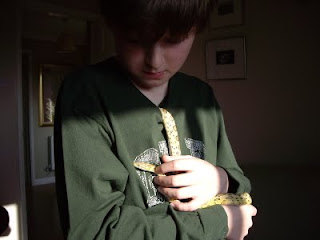 Legless at about 12 months old
Last month, when I posted coming up for air, the accompanying picture was a list of chores. The more observant of you may have noticed the last item on the list: 'feed snake.'
So meet Legless our much loved cornsnake and almost the conclusion of my shortish series on our pets.
Its slightly odd writing 'much loved' in connection with a snake; after all, it's not as if they give you much back. But I'd argue that cornsnakes makes excellent and fascinating pets. They are beautiful, don't smell, require no walking, are educational, and a talking point at dinner parties (not that we host many). Even friends and neighbours ask after the snake, which, let's face it, is something you seldom get with a hamster.
We bought our snake when Dan was ten; he was about eight inches long - the snake that is! Dan named him Legless after the character in Lord of the Rings, which I thought was a witty take on contemporary culture for someone so young. The man in the snake shop didn't get the joke - but then the man in the snake shop is very odd indeed; more scary than the snake according to Jane.
At first Legless lived in a Tupperware box and ate 'pinkies', which is snake owner's jargon for baby mice. Today, he's five feet long resides in a palatial vivarium and dines on an extra large mouse each Sunday evening. 'There's something primeval about the way he strikes and curls round the victim - the speed of it is breathtaking. Then there's the devouring part... little boys love watching that no matter how old they are.
Which brings me to the only problem with Legless as a pet; it's what I call the 'snake thing'. After all, he is... well, a snake. And not everyone seems able to get over that. For a start they eat dead mice, (which reside in our freezer next to the ice cream tubs), every few months their eyes turn blue ands they shed their skin (which is either fascinating or gross depending on how you view it) and to be brutally frank, they are not very cuddly - though Dan likes to pose with Legless curled round his neck - very Gothic.
Aside from being popular with Goths, snakes have a long history of symbolic association. In the Christian tradition the are forever associated with the fall of Adam; in ancient mythology they were symbols of wisdom, their unblinking eyes taken as a sign of intelligence. In some cultures they are symbols of fertility or immortality. The logos of some pharmaceutical associations depict a snake wrapped round a cup (the Bowl of Hygieia) symbolising their supposed powers of healing.
In our house Legless is a symbol of success. We don't do very well with pets: the fish are no more, the dog had to be moved on... And as for Jumbo, our beloved tortoise, well there lies a very sad tale, the telling of which really will be the end of this series.
Posted by The bike shed at 7:55 AM