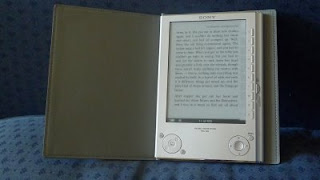 I dusted off my Sony Book Reader the other day - it's been a bit unloved over the winter.

I bought it last autumn, from one of the first batches in the UK, and the only time I can remember wanting to be a gadget pioneer. The idea of carrying round a hundred or so books in such a small package seemed neat. I was also interested in the technology, particularly as I work in the newspaper and magazine industry; there'd been a lot of hype that e-readers like this would be the end of newspapers. Two hundred quid was a ridiculous price, but hey, I'd just had a bonus.

I liked the e-reader: it has a bright paper-like screen, it feels pretty funky, and after you get the hang of it, I'd say it is easier to read than most books.  The reader comes in a leather case designed to makes it feel like a paperback, but I actually prefer to use it out of the case. It's light and easy to hold, you can increase the font size (handy if you've lost your glasses), bookmark pages to read again later; skip between books and a handful of other nifty features. I took it on a camping trip – it was great; low weight and it didn't get damp or battered. If you want to, you can download and listen to music while you read; I haven't tried. It also stores photographs, though the screen is only black and white.

There are other benefits that I hadn't anticipated. Like when I'm reading in bed and Jane decides to cuddle under my arm as she drops off. Nice and cosy, but it's awkward to hold a book in one hand while dutifully stroking your partner's hair with the other - no problem with the e-reader, just click to turn a page!  It displays PDFs and Word documents too, handy if you have large files to read on the train. (I suspect I'm one of very few people in the world with reports from the Office of Fair Trading on their e-reader - how dull am I).  And if you search the web for about two minutes, there are hundreds of free e-books - one click and you can download every Agatha Christie novel in a zip file (Mmm.. not sure that's a benefit). The only problem with the web is that virtually all the free e-books are old classics; Australian web sites have slightly more contemporary titles - something to do with the copyright laws. I suppose as e-readers become more popular there will be scope for person to person file transfer - no different to passing on a paperback really. Lastly, I store copies of my own writing on it, which points the way to the possibility of self publishing e-books, or sharing writing with groups and friends.

More recently, Amazon has launched a new version of its e-reader, the Kindle – it has a bigger screen and the hype suggested that it would eventually replace the newspaper as we know it. Not for a while yet, I suspect, but I doubt there's a major newspaper that isn't watching developments very closely. On-line newspapers have improved beyond recognition since I went to the US in 1996 to see the first ones in production. But they are more like web-site than newspapers as we know them, and there is no evidence that they are stealing large numbers of traditional readers. Will more basic page downloads to an e-reader have wider appeal? I think they might – and they might be a better vehicle for selling advertising; the biggest barrier to profitable online publishing. There are limitations to e-readers (they don't work well for reference books; no colour) and they are not a substitute for a computer, (no search facility, no hyperlinks, no online comments or feed-reader) but then, other than colour photographs, newspapers don't have these features either.

So all in all, it's a pretty cool bit of kit, and about time I got rid of all those old paperbacks, right?

Well yes... except there's a problem. You see, despite paying £200 for the e-reader I can't bring myself to pay £6 for an electronic book! At first I thought this was because the Sony e-book catalogue was limited; and certainly their main agent, the Waterstone's website, is dreadful to use. But it wasn't just that, I buy at least a book a week and there were plenty I could have bought as e-books. It's just that somehow, paying for an electronic file instead of owning the physical copy, feels like bad value. There's not much logic in this – I seldom read books twice, they clutter up the place (a little self-deception here, for in truth I take pleasure in my bookshelves) and it would be more convenient to file them on the e-reader. It's also inconsistent with my attitude to other digital technologies: I download music, I take hundreds of digital photos and seldom print any off (I always hated that sticking in photo-albums), and I don't keep hard copies of my writing. I've even digitised most of my paintings. But no matter how many times I remind myself of this (especially as my cursor hovers over the click to buy button) I always chose the hard copy version.

So there you have it, when it comes to books, it seems that old habits die hard. In the meantime, I find it makes a convenient mouse mat for my netbook. 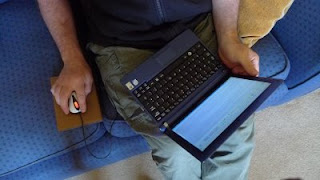