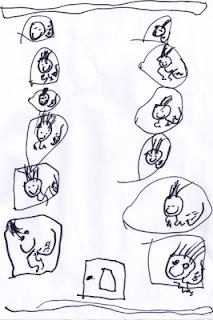 Daddy's office by Dylan, April 2009
When Daniel was about four years old he used to sit on the floor of my studio and draw as I was painting. One time, he took a large sheet of paper and traced a charcoal line from bottom left to top right. What was he drawing, I asked?  An Aeroplane, he replied.  He then drew another line, this one veering off from the first. And what's that?  A parachute, of course!
I have collected hundreds of my children's drawings, each of them catalogued and filed in my studio drawers. They're a wonderful memory of the way they saw the world, more vivid than photographs or a diary could ever be. For when children draw, they respond to their experience of the world, not just what it 'looks' like. And that difference is fundamental. 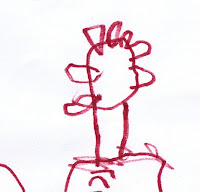 The drawings I posted on on my other blog illustrate the point.  In the picture of the boat, Dylan drew the ship's wheel with my fingers on it - he saw no need to include more of me.  In his painting of the bugs, he drew himself the same size as the bowl - because that was how he experienced them. And look too at the simplicity of the images, the lack of arty pretension, the fearlessness of the painting. I could go on.
As children get older, their paintings change.  Adults praise them for the verisimilitude of their efforts. They are taught to create images as near as possible to how things 'appear' - the more 'realistic' the better - after all, that's proper painting isn't it! And yet, if those same adults were to ask a musician to write a piece of music about the sea, they would find it odd if he returned with a tape recording of the waves!

My old tutor, the marvelous John Skinner, would claim that if we paint our responses, the images are true - more real, in a sense, than any trick of the eye that is conventional drawing. He's in good company in thinking this way; Cezanne said that the challenge of painting is no longer to copy the object, but rather it is to render our sensations in paint.
Cezanne was a genius, but for most of us capturing our responses is incredibly hard to do - or at least to do it honestly, and boldly. Writers will know this; how many times do we bottle out, play safe or simply find ourselves at a loss for words. Painting is much the same. I have painted all my life, but I remember  when John asked me to 'paint the taste of ice cream' I stared at a blank canvass and wondered where to begin. Try asking this same question of children and see what they do.  'No problem' said Michael, when he was small, 'Ice cream is lumpy green.'  If only children could paint as they do, but of more meaningful things.
Children draw before they write, before they speak even. John used to say that drawing is a fundamental language, one that children have by instinct; it is a language that as we grow older we do well to remember. More usually, we forget, inhibited by our adult conventions and expectations - and in so doing we lessen our response to those experiences that matter most. Sometimes, when I walk over the mountains, or listen to the sea, or look at my boys sleeping... the feelings are so powerful I almost transcend myself. My experience is greater - much greater - than simply what I can see. But how do you draw that? And how do you do it with truth? 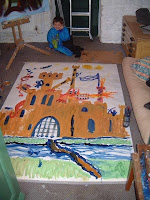