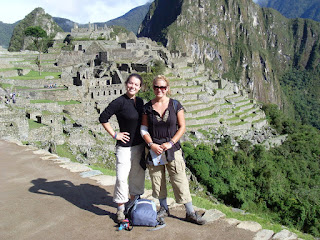 Catherine came to work in my office two summers ago. She was a law student, studying at Bristol University and we offered her a summer placement. She was so diligent and popular that we asked her to come back last summer; she returned for five months before setting off to travel for the remainder of her gap year.

In a sense, there is nothing particularly special about what Catherine is doing. Like many young people, she's taking the opportunity to explore the world (and herself) before settling down to a career and the daily grind. In the Sixties the Hippie Trail was the equivalent; after Iran closed its borders my generation went Inter-Railing or volunteered for Camp America; today's young travellers have wider horizons, but their objectives are much their same.

Catherine is in an enviable position: she's young, intelligent, unburdened by the responsibilities we acquire as we get older, she's even got a job to come back to. So isn't it fairly easy to do what she's doing, and why am I going on about it?

Because her travels reminds me of something I said years ago. I was lamenting how so many people seemed content to do so little with their lives, even when they had the opportunity. Not everyone could be a famous explorer (or writer, or painter, detective, whatever) , but it seemed to me that most people limited their horizons for lack of even trying. 'What they need,' I said (with astonishing arrogance, now I look back), 'is more imagination and drive.' My friends used to rib me about that comment, and though I no doubt deserved to be taken down a peg or ten, I'd still maintain there is some truth in it. Of course, it takes a whole lot more besides, but that's the subject of another post to come soon...

In the meantime Catherine sends the occasional email to the office. We've all enjoyed hearing about her adventures: partying at Mexican carnivals, trekking the forests of Costa Rica, visiting Machu Picchu, staying with the water people in Bolivia, learning the tango in Buenos Aires, relaxing at the vineyards in Santiago, rafting and skydiving in New Zealand, swimming with dolphins and diving on the Great Barrier Reef...

What I admire most about her travels, is not that she's doing something so entirely extraordinary or ground breaking. I'm not even particularly taken by the idea of 'world travelling'; if I had the same opportunity as her I'd probably choose to spend it writing in a mythical village in northern Italy. No, it's not so much what she's doing, as her attitude and approach that I find inspiring: the meticulous planning she put into the trip; the way she raised the money to fund it; the itinerary she chose (interestingly not Bali or Goa); the vision to consider such a wide range of experiences and the determination to achieve them.

Whenever she sends an email I show it to my teenage boys. They happen to go to the same school that Catherine attended (State Comprehensive, though I'd say a good one) - it won't be long before they're off and I'm bereft at their leaving. I hope her emails are an inspiration to them; not to copy her exactly, but to consider what might be possible and how with the right balance of effort and enterprise it might be achieved.

Catherine returns in June. She's coming back to our office for few months then it's law school and and the long hours of a training contract at a top solicitors in Bristol. Compared to many she is extremely fortunate (most of us are, when we come to think of it, especially on global scale) but I'd say she deserves her success. She's worked incredibly hard, but that's not all; to my mind, her most laudable qualities are what I meant, all those years ago, by imagination and drive.
Posted by The bike shed at 7:06 PM