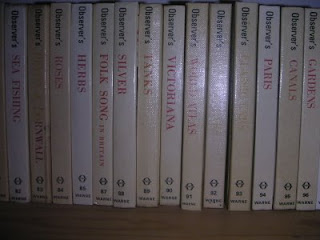 Note, number 86 is missing.
Almost everyone of a certain age and status will remember Observer's Books from their childhood; titles such as Birds and Wild Flowers were some of the most ubiquitous nature guides of the Sixties and Seventies.  Ours were kept in a small bookcase in the 'front room', alongside the AA Guide to Britain's Scenic Wonders, and a copy of the Pears Encyclopedia. I rehashed much of the Observer's Book of Modern Art as the basis of my A-level Art theory paper.
The popularity of Observer's paralleled the rise of the motor car and a generation of middle class families taking day trips to the country. Later their appeal broadened and for little more than pocket money a new title could be acquired every couple of months. It is small wonder, with such nostalgic associations, that they are some of the most collectible of books.
My collection came about in an odd sort of way.  When I bought my house in Pembrokeshire, I thought it would be nice to have a few natural history guides to hand. I'd pick them up at car boot sales and second hand shops - no rush to find them, not really bothered what guides I bought... What I hadn't reckoned on, was the prodigious collecting skills of my father in law.
Within a month he'd found me twenty titles, scouring the book shops and antique fairs of South Wales; a month later I had forty.  By the end of that first summer I had over seventy titles ranging from the obvious natural history editions (Birds, Butterflies, Wild Animals) to popular schoolboy collectibles (aircraft, automobiles, manned spaceflight), educational and historical (Weather, Astronomy, Cathedrals) and the more obscure and specialist (Mosses and Liverworts; Lichens, Firearms).
It became more difficult after that. The trouble was, the book dealers told me, that the last few titles were printed in small editions and most of these had been pulped due to low demand. A good copy of World Atlas 1981 was going for over £100. The sensible thing would have been to stop collecting at this point. Instead, I joined the Observer's Pocket Collectors' Society (OPCS), and eagerly awaited their quarterly newsletter with its renowned Obvertsiments section, listing for sale the more cherished editions at bargain prices.
The OPCS is largely comprised of folk who have rejected reality in favour of a more detailed understanding of the archives of Frederick Warne (publishers) Ltd.  From these excellent people I learned there were in fact only 97 Observer books (not counting the Australian Editions) because number 86, Country Houses, had never been published - though some collectors had specially commissioned 'blank books' to fill the gap in their shelves. I learned too... actually, you really don't want to know.
My collection stalled at 96 for some years, until the publication under licence of an Observer's Book of Observer's Books - soon followed by the Observer's Book of the Wayside and Woodland Books (another series byFrederick Warne (publishers) Ltd). The last title I needed - Folk Songs - was bought after earning a very good annual bonus; it possibly constitutes my most pointless ever purchase. I felt so guilty that I donated the equivalent amount to Medicines sans Frontiers ,making it doubly expensive but somehow less indulgent - I believe 'conscience appeasement' is the correct term for this.
Having acquired a single example of each title, my membership of OPCS was left to lapse.  Not for me were the delights of collecting copies of every edition, cataloguing the numerous updates and authors, or cross referencing the content to the Wayside and Woodland series.
Instead, I had the lichens on my garden wall to identify, the rules of Association Football to clarify, those shells we found on Abermawr... and what is a liverwort anyway?
Posted by The bike shed at 8:36 PM