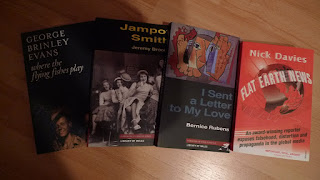 Here's a selection of what I've been reading.
I Sent a Letter to my Love (Bernice Rubens). Ugly, ungainly, Amy Evans has one last chance at love... and yet you know, as you turn each page, that it must all end in disaster. Bernice Rubens is a new writer to me, though well known in her day (Booker Prize Winner) - the Library of Wales sets out to reprint books by similar, excellent but recently forgotten, authors. The series is financially supported by the Welsh Assembly - I suspect at very modest cost - well done to them for having the vision.
Jampot Smith (Jeremy Brooks) Yet another book from the marvelous Library of Wales series. A semi-autobiographical and sensitive account of growing up in Llandudno during the war; captures the inner voice of a teenager with convincing skill. I hear it is to be adapted for the stage.
Bad Science (Ben Goldacre) I laughed and I cried. My favourite line refers to 'Dr Gillian McKeith, or to use her full medical title, Gillian McKeith.' Ultimately this ought to be a shocking book - and it is - but it says something about my cynicism of journalists that much of it was exactly as I'd expected. The chapter on the nonsense written about the MMR jab is jaw dropping. Good website too.
Where The Flying Fishes Play (George Brinley Evans) This book reminded me of a lovely old couple Jane and I met on honeymoon; one evening the chap showed us a photo that he'd kept in his wallet for fifty years: it was him as young man in the war. 'I asked to be sent to Peterborough,' he joked, 'so they posted me to Baghdahd.'
Where the Flying Fishes Play is Brindley Evan's account of his experiences as a seventeen-year- old, sent to Burma in a waterborne army division. I have seldom read a book with so many lazy cliches - so not brilliantly written, despite the blurb - and yet its detail and sensitivity drew me in. I couldn't help but think about the impact that three years in Burma must have had, about the details he must have left out - and it brought to mind my grandfather's generation, who would talk endlessly about the war, often with an affection that reminds me now of how I sometimes reminisce about my time at university. How lucky I am.
The Pleasures and Sorrows of Work (Alain De Botton)  Not usually a huge fan of Alain De Botton, but this is his best book yet.  Very funny in parts - see my post on who we are and what we do.  Recommended as ironic present for workaholics.
And on the go at the moment:
Selected Writings (Gerard De Nerval) Recommended by Sara, who follows this blog and shares book recommendations with me. Not entirely convinced at the moment - it's odd, but good at the same time. Will report back later.
Flat Earth News (Nick Davies) Insider's account of the ills of modern journalism - the sheer scale of the falsehoods, mistakes, and nonsense we are fed every day - and why, and how, and why we should care. We tend to like books that reinforce our preconceptions, but I'm certain this is going to be more profound that that. One chapter in and I'm desperate to read more - I'll probably stay up all night.
Time for bed.
Posted by The bike shed at 10:06 PM