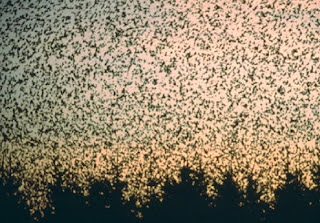 After watching the crows all summer we started to notice the starlings flying past as the sun goes down. It turns out that only three miles from our house is the biggest starling roost in Wales . Estimates vary but I'm told it's a safe bet that more than a million birds gather there. They roost in a small copse of fir trees near to Plumstone Mountain.

Go there half an hour before sunset and face south with your back to the trees. About fifteen miles away is a small tump known as Arnolds Hill. If you look carefully, what appears to be a plume of smoke will rise from it and drift towards you. Soon after the birds will arrive.

The first flocks swirl above the trees, making patterns as they rise and fall in ever tighter circles. You will hear them too, a hundred thousand wings swooshing overhead as they change direction. Then more will arrive; from St Davids, Llanrhian, Fishgaurd and Preseli. If it's a clear night the sky will be indigo, perhaps turning pink. Still they will come; from Llandeloy, Pembroke Dock and Clarbeston Road. Buzzards and sparrow hawks will hover by the cow sheds, an owl might flit from tree to tree. And above the copse the sky will be black with birds.

Last time I was there, John Cod, who owns the cow sheds, told me it was nothing to see five different raptors in the air at one time. 'Sometimes there are more than 3 million starlings,' he says. 'Can you believe they are a protected species?' His house sits in the shadow of the fir trees. 'The only problem with living here is the bird shit; good for the soil though.' Would I like some fuscia cuttings?

Jon farms here, trains motorcyclists as a sideline and knows more about birds than most of the twitchers who chase round the county with their telescopes. There's a hushed mention of a rare warbler - I'm to keep my eyes peeled on a certain moor. He tells me to come at dawn when the starlings leave, evidently more quickly than they arrive and in bigger flocks. I'm to look for the stragglers in the road; every night there are some that don't make it back – easy pickings for the buzzards.

Before leaving, I headed into the trees, picking my way through the forest break by moonshine. It seemed a small area for so many birds. You can't help but wonder why they come here. I could hear them calling, a soft ripple that ebbed and flowed like running water; as if there were a stream nearby, a waterfall perhaps.