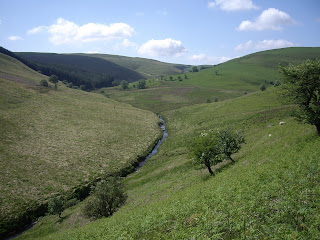 Not a hostel in sight -
actually the magnificent Tyn Y Cornel , rescued from YHA, is just around the corner

Near my house in Pembrokeshire the YHA has refurbished one of its older, more traditional, hostels: Pwll Deri near Strumble Head. It's one of the YHA's headline investments this year and if I'm honest I've not yet seen the results, though I hope to pass by soon. If I'm equally honest I'm a bit of a late returner to YHA, having let my long-term membership lapse in the late nineties.

I rejoined the YHA as my children reached the age when the idea of hostelling began to appeal. It was good to find the Association had a brighter image; even better that it had ditched some of the old rules and restrictions – no entry till 5.00pm, up early for chores and God forbid you might fancy a drink – even the most diehard of traditionalists can't be arsed with all that nonsense. So why is it that despite the fresh new looks and the investment in places like Pwll Deri I still have an uncomfortable feeling that something is going wrong?

I think there's a clue in the section of the YHA's website where the management explains its strategy. Amongst the carefully worded objectives are two statements that need to be read together. The first says it is an objective of the YHA to 'develop great hostels in great locations .... in destinations identified as key to our guests.' The second says the YHA will, 'close and sell sites which are not in key destinations, and reinvest in the remaining network.' So what's wrong with that; sounds like good business sense doesn't it?

The problem is that if you take this approach to its logical conclusion you end up with a network that is limited to major cities (primarily used by international travellers) and a few honey pots in the National Parks (where arguably hostels are least needed because of alternative choices). In the meantime huge areas of the countryside – really important wilderness areas included – become devoid of hostels because they aren't in 'key destinations' or 'identified as key to our guests'.

And if you think this is just a problem in theory, take look at the map of hostels in Mid Wales - if it weren't for the Elenydd Trust, which bought and rescued two hostels that the YHA was intent on selling, there would not be a single hostel in the Cambrian Mountains between Brecon and Dolgellau (maybe Borth if you fancy a long diversion to the seaside). The list of closures in Mid Wales is legion: Bryn Poeth Uchaf, Glascwm, Blaencarron. Ystymtuen. Ystradfellte, Capel y Ffin – it's a shameful indictment of the YHA strategy in action. And it's not just Mid Wales – Northumberland is another good example of an important wilderness area without a decent network of hostels.

One of the most important roles of the YHA (and it was implied in its memberhip promise for years) is to provide a network of cheap accomodation in all areas of important countryside, and especially in those areas that are somewhat off the beaten track. The word network is important here. And it's the provision of a wide and diverse network which, frankly, the YHA's current policy is singularly failing to achieve. Deep down the YHA knows that its network is important – I'm certain the reason it has invested in Pwll Deri is because it's a key staging post on the popular Pembrokeshire Coast Path – and yet its current strategy actually commits it to reducing that same network in areas where hostels are most needed.

No doubt someone will tell me it's not economic to run simple hostels in far flung places. Perhaps so, but the poverty of imagination and creative solutions still leaves a lot to be desired. How come the Elenydd trust can do it? Why can't the YHA find more partnership organisations and private franchisees to fill the gaps? But beyond all this, it's important to remember that the YHA is a charity and a membership organisation – it should not be necessary to run it entirely on the lines of economic profit; there ought to be more room for cross-subsidy in important wilderness areas such as those I mentioned. To draw a parallel, if books were published on the basis of what the majority of people considered to be key titles on subjects they identified as key topics - and that any titles outside of these narrow parameters were gradually taken out of print - then what variety and choice would we see in our bookshops? Today's top sellers would survive, but anything less popular, no matter how important and meaningful, wouldn't pass the test – poetry wouldn't get a look in. Is that the strategy we would expect a publishing charity to adopt?

So what's the solution? I don't for a moment think it's easy. But a start might be to add a single sentence to the YHA strategy and mission statement along the lines of: the YHA aims to maintain a comprehensive network of hostels that provides access to the all major areas of open countryside. No doubt that sentence could be improved – it took me only a few moments to write – but hopefully you get the idea. I just wish the YHA did too.

P.S. On the website of the Elenydd trust there is a copy of an old article that tells of how £100 was raised for the purchase of a hostel in Blaencarron near Tregarron. The fundraisers were organising a working party to fit out the building. I wonder how they would have felt to learn Bleancarron was sold because it wasn't in a key destination, the proceeds reinvested in hostels in London and Manchester? Shame on you YHA.