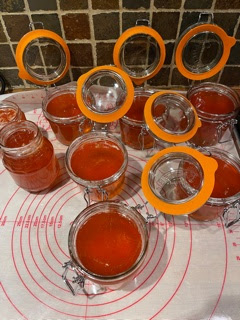 This week I made quince jelly from the fruits in my garden. It's become an annual ritual; my own miniature harvest festival with a bittersweet tang that marks the start of winter and yet the ending of my busiest period of work. The coming months will be—I hope—ones of less stress and more creative plenty.

Although even to write that has an edge to it too.

For only recently I gave a talk to some students in which I claimed the difference between creative and corporate writing is more blurred than it seems. I use much the same skills in crafting a blog post as I do in writing a workplace communication; the need for truth and clarity are as applicable to a company announcement as they are to the personal essay. Yesterday I read for the umpteenth time, Orwell's 'In Praise of English Cooking', a piece that in its rounded perfection would merit a place on any menu for a last literary meal on earth.

Orwell doesn't mention quince in his list of British delicacies, though at one time it was more common here than apples, which were not widespread until the middle ages. Today we consider it more of a Mediterranean or even oriental plant, with Japanese varieties having moderate popularity in discerning gardens. The fruits are hard and inedible when raw, but—in some ways like words—when carefully prepared they have seemingly endless possibilities, with a capacity to surprise and delight as well stimulate the tongue.

My crop this year was ample for our needs. In our former house, we had a long hedge of bushes that produced sacks of fruit but made the processing somewhat of a chore. I now have two small shrubs and yet we harvested enough to make four litres of piquant jelly. Had I had more time, I could have made the pith into membrilo, a delicacy from the Iberian peninsula, more commonly known as quince cheese.

Alternatively, I might have made quince vodka or quince pudding; my friend and fellow blogger Michelle once cooked a quince tarte tatin which she claimed was delicious. Orwell says in his essay that Oxford orange marmalade is one of England's finest foods, but I wonder if he knew that the word comes from the Portuguese marmalada which means quince preparation.

On which subject, my annual ritual is more about patience than skill. I don't follow a recipe but simply chop the fruits, cover with water and bring to a simmer...  After an hour at most, I mash the mixture and strain it through a muslin bag. The resulting juice is mixed 60:40 to sugar, boiled vigorously and then decanted into sterile jars. Once it's cooled, you can spread it on your toast the next morning... or perhaps you prefer muffins, or eating it with cheese or merely spooned from the jar.

Who cares, it's all good.

I shall share much of our bounty with friends, for though it keeps well the jelly is best eaten when young. There's a piquancy to the new crop that's more alive and arresting than any supposed depth of flavour that comes with age. Or in plainer English—and the type of words Orwell would favour—it comes with a raw and vigorous smack in the mouth!

Perhaps that's why I like it so much; why this strange gnarly apple appeals to my sense of self; why its tang is something I crave and yet can't quite fix and even less hold onto?

Quinces it seems are among the oldest of fruits but their taste is the flavour of youth.