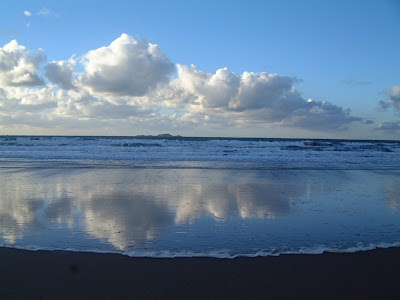 If you were to stand on the cliffs near my house looking in a vaguely west-south-westerly direction, the next dry land in your line of sight would be the eastern seaboard of America. To reach it would require 3,000 miles of sailing into the wind, assuming that is, you don't drift north to Canada or slip south to the Bahamas. Only a few centuries ago, thousands of migrants took that chance, departing from the harbours of Pembrokeshire, just as they did from Cardiff and Bristol and Cork.

I often think about how grim life must have been to impel those early settlers. Anyone who lives here doesn't romanticise the danger of the sea; to embark on that journey in the full knowledge of the risks must have taken great courage. If we add in the one-way nature of the voyage and the ignorance of the land and life they were sailing towards, it's near certain that desperation was their most likely driver.

In what's a free-flowing post, it would be understandable if I were to now veer off my intended course and make comparisons with the migrants of today. After all, there's little doubt that what drives the diasporas from the Middle East to Europe, from Central to North America —or for that matter, from rural to urban India— is a not dissimilar anguish.

But instead, I'm going to hold to my compass, and reflect, as I did while looking out to the ocean this morning, that it's because of our connection with its past, that North America is simultaneously foreign and yet familiar to us today. In many ways travelling to France is a more alien experience, an idea that's  captured in the classic geopolitical essay question: 'The Channel is wider than the Atlantic. Discuss.'

This tension between the foreign and the familiar was surely key to the appeal of Alistair Cooke's legendary radio broadcast, Letter from America. For over fifty years, he wrote a weekly epistle on the everyday lives and politics of the USA, gently—and generously— exploring the subtleties that are lost in mainstream media. In a sense, it was not that dissimilar to a blog, reflecting on his comings and goings and those of people he knew; building a picture of a place and its people over time. I miss those broadcasts, and more to the point, think we are lesser in our understanding for their loss.

How I wonder, would Alistair Cooke would have written of the Obama years, or of Trump and the Capitol riots? Here in the UK we tend to think of US history in terms of its presidents and wars, just as we delineate our own in relation to monarchy and conflict. But I suspect Cooke would have focused more on the attitudes and aspirations—as well as the despairs and desperations—that define us more accurately than the words or policies of any politician.

There's a growing trend in academic writing for what's sometimes called 'history from below.'  In contrast to the traditional focus on supposedly seminal events, this 'micro-history of communities' emphasises the role of everyday struggles and beliefs as underlying drivers of change. When I think of my own village, and the reality that even today I have neighbours who've travelled no further than Cardiff, I wonder if it's not a more accurate perspective on our past, and indeed our present.

One of the delights of writing this blog is that I never know what metaphoric shores my words will wash up on. Over the years, I've made connections as far apart as Australia and Alaska, neither of which places have I physically visited. In writing that last sentence I  could have equally have chosen Nepal and New England both of which I've travelled to, but would not pretend to know in any deep sense. Indeed, with the exception of France, I suspect I've learned more about life overseas from the blogs I read, than my limited time abroad.

A few weeks ago, two US followers of Views From The Bikeshed asked me how they might obtain copies of my books. It seems that copyright laws aren't as internationally seamless as we might wish them to be. No matter, a trip to the post office and the packages were soon on their way to Pennsylvania and North Carolina. What a joy that I could do that so easily...

Seriously, what a privilege it is to be able to share words across continents.  And what a delight that someone should take an interest in my life and what I have to say, thinking that perhaps it has something of relevance to them. That one copy is now in Pennsylvania is especially appropriate for it was there that the majority of welsh settlers found a home. The other in North Carolina is but a geographic stone's throw from my friend, now resident in Greenville, but who once lived down the road.

In truth, none of my writing is really about me. It's intended to be universal, and if it succeeds it's because the connections between us are closer than we think. This autumn, I had hoped for my latest collection to be published; it's now scheduled for next year. When the first copies arrive I shall send some to the US once again; to those bloggers who follow me and who in their way correspond in return. If I can be so bold, I hope it will be my own small Letter to America;  a tiny contribution to narrowing the width—and the fear—of the ocean between us.