I love my car.
If you'd told me three years ago that I'd ever write that I'd have laughed—politely perhaps, but with disbelief nonetheless. Because all my adult life I've regarded motors as mere tools—and expensive ones at that. For decades I was entitled to a fancy model from my employer and always opted for a budget alternative with the balance in cash. I took no pleasure in driving cars, regarded the putative status they bestow as shallow, and frankly thought most petrol heads were, well...

So it's probably no surprise that the one I'm delighted with is not exactly fashionable. Nor will you be astonished to learn that I don't polish the paintwork every Sunday—or that I know nothing of its performance other than the miles per gallon. The trim is basic, the electrics functional and the overall ambience more plastic wrap than walnut dash.

But then that's what you'd expect from a Citroen Berlingo, which is essentially a van converted into a family car with the look of a baguette wagon.  It's one of those go anywhere, do anything, but don't try to look cool type of vehicles. When I bought mine the extras I coveted were a roof rack, a tow bar and the optional box in the centre console which is big enough to hold a flask and picnic.

And yet, for the first time in my life I find myself driving along and saying to Jane (or frankly, just to myself), you know, I REALLY do like this car, or  I've absolutely no desire to own any other... or (and by this time Jane is doing that 'eyes to ceiling' look) isn't this just the best vehicle we've ever owned...  In my trance of self-satisfaction I've even acquired an album of photos and posted on the Berlingo Forum users group!

I suppose it's possible that this is all a sort of inverted snobbery, and certainly, I still regard expensive cars as a dubious character trait. But I got over all that angst years ago. So, no, my head has been turned and I genuinely like my car; love it even...  If proof were needed I've had it valeted twice in as many months!

Of course, part of what I like so much is that it's practical: the seats come out for carrying loads, there's plenty of room for the dog; everyone has their own seat, the roof rack takes four kayaks with ease ...  And I haven't even mentioned the boot jump, which is a clever unit that converts the whole van into a mini camper, complete with seats, cooker, table and a double bed.  It folds into the boot space when not in use, and you're back to a normal car.

Except it's not normal at all: it's fantastic and so underrated, and definitely the best car I've ever owned... and you should get one; honesty, you really should...  At least, that's what I've said to my friends and my boys and colleagues and almost anyone who'll listen.  So much so that the other day I realised I've become one of those car bores who go on and on...

Which is probably a good point to end this post, because if I don't you'll fall asleep - or like two of my friends and one of my sons, end up buying one too!  Who'd have thought I'd be a motoring role model—life, as they say, is full of surprises. 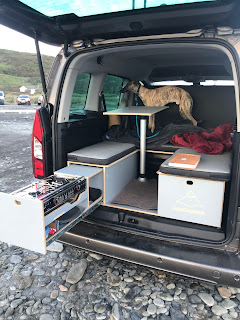 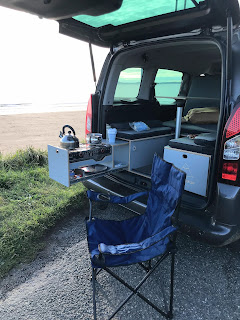 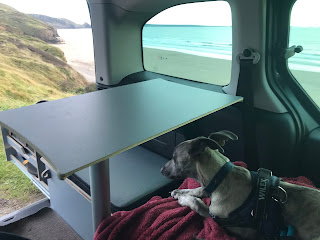 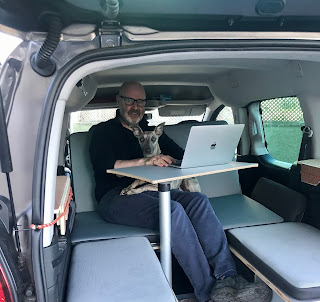