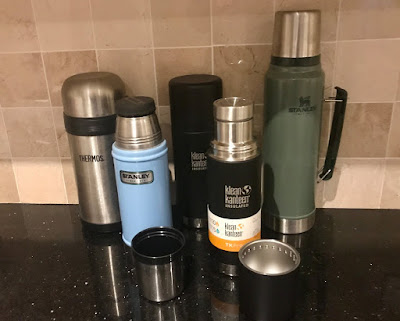 A selection of flasks - and of hopes and dreams?

It's seven years since I wrote a post about my collections - a reflection on my lacklustre blogging rather than any absence of quirky accruals. But today, as I ripped open a package from Amazon to get at what I've since realised is my fourteenth vacuum flask, I thought, it's time I put my fingers to the keys, if only by way of catharsis.

I love flasks - odd I know, but there you have it. There's something of the 'last of the summer wine' about them; something that reminds me of my grandad; of days in the park, picnics in Northumberland's hills; childhood fantasies of camping and fishing and running away...

My first was a birthday present. I must have been about thirteen and I remember devising little expeditions to take it on: I tramped to the dunes at Seaton Sluice, caught the train to the castle at Tynemouth and cycled to Durham on my three-speed bike, lining its saddlebag with a jumper for fear of the silvered vial shattering. Which inevitably, one day it did - for it was of the blown-glass Thermos design, cheap and effective at heat retention, but too delicate for the comings and goings of a would-be Huckleberry Finn.

Not that he could ever have used one - for the vacuum flask wasn't invented until 1892 when James Dewar came up with the idea as a means of maintaining constant temperatures in chemical experiments. Ironically, he was most interested in keeping the contents cold.  It was the Germans who took it further, creating the Thermos brand, now a generic term for vacuum bottles - while in the US the Stanley Insulating Company came up with its iconic all-steel unbreakable design. Today, these companies remain market leaders - and deservedly so, as I found recently when my green Stanley Classic was replaced under its lifetime guarantee after fifteen years of hard service.

In truth, I'd wavered about sending it back - for these are objects of life and could just as easily be included under my blog series of that name.  But I'm consoled by my latest acquisition - the TK Pro from Klean Kanteen: a thing of eco-friendly, BPA and toxin-free beauty that will keep my coffee hot for 28 hours or ice-cold for more than four days.  I was so impressed I bought two!

Because you see, flasks to me are a little like shoes are to Jane - you need different ones for each occasion: family outings (1.5 litres) backpacking (wide neck, no cup), skiing (easy opening)...  And to be fair, my fourteen variants are spread over two countries, with some being kept more for nostalgia than regular usage.

On the subject of which, that first flask had a special feature that I've searched for in vain ever since; its bottom section unscrewed to reveal a little bottle for carrying milk with room for some sugar cubes and a tiny spoon. I used to keep in there a list of places I'd been and girls I wished had been with me. Forty-five years on and I still try twisting the bottom of every flask that might conceivably have the same design. Strange isn't it?  But then...

How funny are the things we love. Of course, it's not the objects themselves but the memories they hold that we care for - or in the case of the new, the promise of what we wish them to bring. This weekend, I shared a flask with Jane as the rain beat on the windscreen of our car, clouds scudding over Yskirrid, the fields sodden from the storms. I'd used my new TK Pro. That's a nice flask, she said, very hot.  She meant the tea, but I smiled anyway.
Posted by The bike shed at 3:09 PM