Blogging - and how words have a life of their own 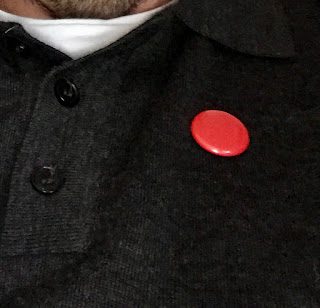 Red dots and the unexpected joys of blogging

Early in my writing career - long before I was a 'published author' - a friend and mentor advised me to share my work in whatever ways I could. The reason, she explained, is that once you put your words out there, all manner of coincidence and possibility will emerge.  Shortly afterwards, I started Views From The Bike Shed, and the rest, as they say, is...

I retold that story last week to some students at the University of the West Of the England where I was giving a lecture on blogging. There's no better way, I suggested, to achieve a professional online presence, and commit to the adventure that is the shaping and sharing of your thoughts. What follows, I said, may not be fame or fortune, but I guarantee it will surprise you.

By way of example, I described how from those humble beginnings, this blog became foundational to my degree, to my books, to articles being published elsewhere. Crafting the posts taught me the skills, and the care, I needed to be a serious writer - which I've since applied to both the corporate and personal sphere. To my amazement, writing is now what I do now for a living - and in ways I could never have imagined when starting out.

But perhaps, the greatest joy of blogging is its 'message in a bottle' capacity for our posts to wash up on unexpected shores.

More than ten years ago I wrote a piece about (I thought) a long-forgotten outdoor writer named Derrick Booth - it touched a chord with hundreds of others in the backpacking community, and still today I receive kind comments and occasional emails in response. To my great delight, Derrick himself once wrote to me from California. I have dozens of other examples, from pieces I've written on bothies and wildflowers that somewhat inexplicably still have a high online ranking, to articles that were later published in journals, books and magazines. The most exciting - and frustrating - thing, is that you can never tell what is going to resonate - some of what I think of as my best pieces languish long forgotten, others seem always to be making new connections.

I've made dozens of those through blogging too - including a friendship with my all-time blogging hero, who ironically,  turned out to live down the road. From similar tentative beginnings, Michelle at Vegplotting now writes for several magazines and newspapers, has a huge following and - being more sociable than me - international friendships that have taken her to the US, Canada and more.

Last week, after a long lay off, I wrote a short piece on of all things, my collection of vacuum flasks.  There were only a couple of comments on here, but I received dozens on a Facebook cross-post - that's a development I need to ponder. And I will. Because I've always approached my blogging as seriously as I do my other work. When I wrote above, that there's no better way 'to achieve a professional online presence...' the operative word was aimed more at our attitude than any prospect of payment.

For when we publish - online or in print - we have a responsibility for our words that's fundamentally different from journaling or notebooks.  It's not legal considerations that I'm hinting at here - it's that when we publish, in whatever form, we must care - and take responsibility for - the quality of what we say, as well as the tone of how we say it. Because, one way or the other, those words will find their way back to us, often in the most surprising of ways.

Yesterday morning I went to my favourite caff - a little converted canal boat that I happened to write about last year.  It's owner Kelly had been pleased with my quasi review, but little did I know she'd since followed more of my writing.  As I ordered two eggs on toast, she rummaged in her bag, handing me a tiny plastic pouch: I bought you this after reading your piece on introverts - it made me smile.

You'll have to read the post to understand the significance, but inside the bag she gave me was a red button badge.  I think that's the oddest way that anyone has ever said thanks for something I've written - and you know what, it absolutely made my day.
Posted by The bike shed at 8:09 PM