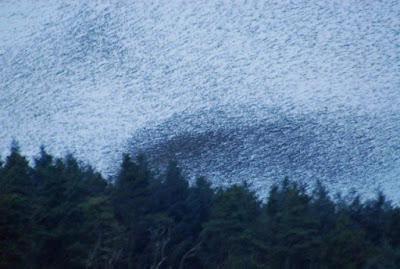 'The price of being misunderstood...  They call you devil or they call you god.'
Richard Bach - Jonathan Livingston Seagull.

As I start typing it has dawned on me that I'm about to write a post in praise of heresy - on of all days, Easter Sunday. The gentle irony appeals, for in its original usage, 'heresy' meant to hold a belief or opinion contrary to the orthodox Christian faith. My views would certainly fit that description - though less so than some might assume - but, opening paragraphs aside, it's not religious dissent which interests me.

Heresy, in a secular context, means to question the established order of beliefs. My dictionary describes it as 'views profoundly at odds with accepted opinion', and that's as relevant to politics, the pub or the workplace, as it is to the chapel or cathedral.  More to the point - in a world as resistant as ever to those who venture outside the stockade - I think we need a little more heresy in our lives.

For as long as I can remember I've been interested in why we think as we do - and troubled by how flimsily many of our beliefs seem to be built. As a child, I struggled with the platitudes that were offered as rules of behaviour; the supposedly right and wrong ways of seeing and being in the world. 'You'll understand when you're older,' my maternal grandmother would say...   Well, I'm fifty-six now, and at times I still don't get it!

To be fair, my father didn't tow the establishment line. One of my earliest memories is being allowed a day off school rather than wave flags at the queen when she visited our town. On the other hand, he held some ridiculous views - everything in the universe is made with carbon - to which he would allow no counter because he'd heard (and misunderstood) something of the sort on a BBC2 documentary.

Which is not untypical, because chief among our opinion formers is the media. The press and broadcast channels curate which issues we consider important, and more subtly, they promote how we should think about them. Social media makes a dent and occasionally gives voice - not least in blogging - but mainstream opinions and tastes, remain, almost by definition, as orthodox as ever.

The workplace too is awash with conformity - from the quasi-religious faith in 'colleague engagement', to the economists' disconnected pursuit of 'rational man', corporate orthodoxy is founded on the flimsiest of evidence. But to challenge risks ridicule or exposing the folly of those in charge.... no wonder most keep quiet.

And much the same is true of the pub, the golf club, our schoolyards.. even the writing and creative community of which I'm a part. In all walks of life we find opinions so embedded or popularised they resist any counter. I've heard it said that a non believer in the USA could never be elected president; in the UK, I'd suggest the same goes for any politician questioning the efficacy of the national health service. These are not good things.

But for all this, little corners of hope exist.

My long time colleague at work has one of the best 'antennas' I've ever encountered. On sensing any hint of management bullshit, no matter how eloquent the soundbite I've crafted, she'll raise her eyes to say, 'Really, Mark...?'  -  and invariably I change the sentence and smile.

For this is exactly the sort of heresy we need more of. Not flat earth theorists or holocaust deniers - but the gentle probing of what's taken for granted, and which, with a little reflection, doesn't stand scrutiny, or need to be so dogmatic.

The kind of everyday heretics I like are those who might say, Excuse me for asking, but...

-  you know these local libraries which I keep hearing are essential bastions of learning... could you tell me where I'd find one.

-  of course, we all love Rugby... but isn't something awry when the England Captain has been banned for a total of 60 weeks...

-  leave the skin on my kiwi fruit please; they really do taste better that way!

These statements are not meant too seriously, however, they illustrate a point. The value in heretical thoughts is not that they need to be the truth, the whole truth, and nothing ...  but that in asking them at all, we become open to different, and sometimes better possibilities.

Conformity is the scourge of reasoning - and no more so than in the stories we tell ourselves to bolster our prejudices and intuitions. Over the last forty years, psychologists have revolutionised our understanding of why we do this, and how difficult all of us find it to deconstruct our embedded modes of thinking.

I recently read the Nobel prize winner, Daniel Kahneman's, brilliant Thinking Fast and Slow -  a sort of psychology equivalent to Hawking's Brief History of Time - and realised I fell into almost all the traps his work exposes. Orthodoxy exploits these failings, promoting only evidence which shores up the norm; heresy confronts it - and is open to change in the light of its discoveries.

So I say let's have more heretics - even at Easter. Apart from anything else I'd have more mates because the people I like most are invariably those with interesting and different views - some of my best friends have profound faith, nearly all have lifestyles at a tangent to mine. We can't all be Copernicus or Picasso, changing the way the world sees itself  - but in our own little hefts, we can at least make a difference to ourselves. Amen to that.
Posted by The bike shed at 7:55 PM