In North Korea: lives and lies in the state of truth 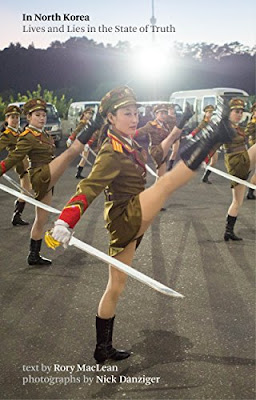 John Ruskin once wrote that drawing is as much the art of looking as it is of making marks. What he didn't say, was that there is more to seeing than meets the eye.

Anyone sketching a still life will quickly learn that the negative spaces - the gaps between the subjects - are just as vital as the objects in focus.  Something similar goes on in music - listen to any of the great jazz pianists, and you'll 'hear' the pauses between the notes.

Rory Maclean's and Nick Danziger's latest book IN NORTH KOREA: lives and lies in the state of truth is a masterpiece of what writers call 'show not tell'.  Interviewing a carefully selected (not by them) cast of everyday citizens, they chronicle the daily life and hopes of a farmer, fisherman, soccer player, student, subway attendant...  recording the stories, as told by the participants, always in the presence of Government officials, jotting down every phrase, full stop and comma.

A master of sensitivity, Maclean writes without comment  -  transcribing the assertions of love and loyalty to our dear leader, so accurately, and so frequently, that their emptiness echoes with his sorrow. Danziger's photos are a counterpoint to the verbatim: stark, graphical, at times arrestingly banal - they are disconcertingly rich, yet bereft of feeling.

If only those Government observers had been writers too, they'd have understood what's going on here. At face value, the book is a collection of staged photos and stilted interviews; behind this necessary deceit, its truth lies between the lines.

IN NORTH KOREA (available only on Kindle) is a short work; more of a non-fiction novella. It was made possible with the help of the British Council, which facilitated access to the usually closed Democratic Republic. I've no doubt Maclean's easygoing diplomacy was put to regular use too - and the project, of course, is especially prescient given recent events.

A side of me thinks it's a pity the book is exclusive to Kindle. Another - the one that's a fan of digital media - is pleased, for it demonstrates the format can launch important work from leading authors. The colour photographs are best viewed on a tablet version of Kindle, using the app that can be downloaded free of charge. At £2.99 IN NORTH KOREA shouldn't exclude on the basis of price.

If there's any weakness, to my mind it's the two-page afterword - the only point at which the authors drop their guard to comment briefly on the rising tensions with the West. Perhaps that's inevitable but, to my mind, the stories and pictures are stronger alone - their interpretation best left to the reader, and to time.

In collaborating with such deliberate understatement, Maclean and Danziger have given a subtle and powerful voice to the people they met. For as all writers, photographers - and for that matter, all dictators, know - truth and lies are revealed not so much in what we say, as what is left unsaid.
Posted by The bike shed at 2:12 PM