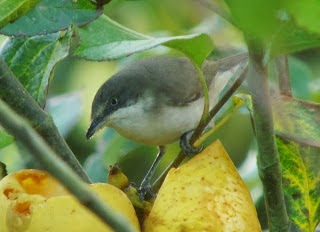 It's been a 'mega' weekend in Pembrokeshire.

Not because of the weather, though it was surprisingly good. Nor was it due to the tides (big at this time of year) - or even Wales winning the rugby.

Rather, it was because of a bird - a Western Orphean Warbler to be precise - taking residence in a garden near Dale.

That might not sound very mega to you - but in the bird watching community, it's evidently a big deal. In twitching vocabulary (yes, there's actually a wiki page on this), a 'mega' refers to an extremely rare sighting - and in this case a first official recording for the UK.

The birding internet sites were all of a flutter at the news; folk began travelling from afar - some from very far indeed. The garden welcomed a stream of visitors all weekend - special parking arrangements were made, film crews were present, there were allocated time-slots for viewing - and a grand time was had by all. I might even have gone myself had I not been struck down with a heavy cold.

Twitchers would tell you there's a social aspect to these events; that making the trip is half the fun; that there's scientific benefit to their collective recordings... I'm sure there's truth in all this. But I'm equally sure that obsession is at the root of it all. 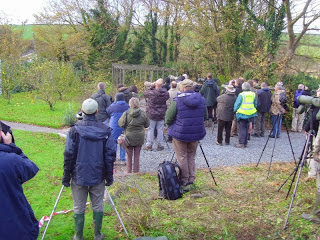 In this case, the craze manifests itself as a willingness to travel thousands of miles to eye-spy a small bird in an apple tree. But I could point to equally (apparently) irrational activities by stamp collectors, train spotters, international travellers... I even know someone who's been to see Barry Manilow over 100 times!

For the sake of clarity, I'm not talking here about obsession as a compulsive disorder - that's a form of mental illness, often linked to tormented thoughts, and not something to be light hearted about. It's a different use of the term.

Rather I'm referring to those obsessions which it seems to me to drive positive action - actions that are often highly creative and life enhancing.  Without it we wouldn't have brilliant musicians, genius scientists, outstanding sportspeople...  I reckon I could coherently argue that, more than any other human quality, obsession has deepened our knowledge of everything from the stars to statistics, from mountains to molecules... almost anything that takes time and effort to acquire.

Of course, not all obsessives are geniuses or ever likely to benefit the rest of us - but without encouraging the many, we won't find the few who are. And if a little bird in a garden can do that - then in my book, that's pretty mega too.
Posted by The bike shed at 4:50 PM