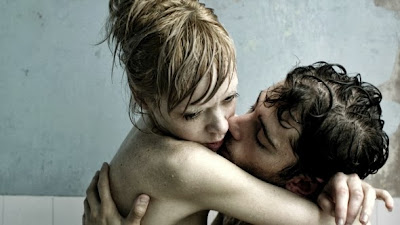 The novels of Niall Griffiths are among the most raw and savage of contemporary narratives. His better known titles include Sheepshagger, Runt and Wreckage. In reading his books, you’re made intimate with an underworld of drugs, sex and violence…

And never more so than his 2002 novel, Kelly and Victor – mention of which induces a sharp whistle from those who had the stomach to finish it.  The story is so intensely disturbing that of all Griffiths’ books, it’s the one I’d have thought least likely to be made into a film.

Which just goes to show how much I know.

This week Kelly and Victor opened at independent cinemas across the UK.  Its portrayal of the protagonists’ destructive love affair is as eye-wateringly graphic, as deeply perturbing – and as tender and empathetic - as is the book.

Kelly and Victor is the story of two young people, swimming in a whirlpool of abuse.  The psychological damage they have suffered takes its physical form in their lovemaking – the intensity of which momentarily releases them from the vicious spiral.  But in so doing, stirs an equally addictive, and ultimately tragic, compulsion.

Directed by Kieran Evans, the film stars Antonia Campbell Hughes and Julian Morris. It is beautifully photographed and carefully paced to maintain the tension; it does the book justice without being a slavish copy. And at ninety minutes, it’s thankfully not too long – something that’s the curse of so many mainstream movies.

Campbell Hughes is an especially inspired casting; her portrayal of the frail and elfin Kelly is both believable and entirely absent of sentimentality – for me, she was the standout of the film.  The soundtrack would be my second choice: wonderfully evocative of the mixed up, fucked up, under-world inhabited by the characters. A close third: the cinematic treatment of the urban landscapes, reminiscent of the original Get Carter.

Actually, that film isn’t an unfair comparison as a whole. Because, as with Get Carter, behind the superficial brutality lies a deeper compassion. The genius of Kelly and Victor is not that it is unflinchingly profane – but that despite this, you care about the characters. And the reason is that in being so flawed, they are also deeply human.

The British Film Institute has chosen Kelly and Victor as their pick of the week.  There are plenty of detailed reviews on the intranet and frankly, there’s not much I can add here.

Except, as I came out of the arts centre, I was struck by how intense the experience had been – how much I’d enjoyed it; how engaged with the film I’d been.  In recent years I’ve come to loathe contemporary cinema – the predictability of yet another Spielberg inspired white-knuckle opening scene, literally sends me to sleep.

This was different – it was cinema as it should be; real drama – and it takes its cue from an almost lost heritage of great British cinema. We need more films like Kelly and Victor.  But for that to happen I guess we need more people to make the effort.

Go see for yourself.
Posted by The bike shed at 9:38 AM