Every child a reader 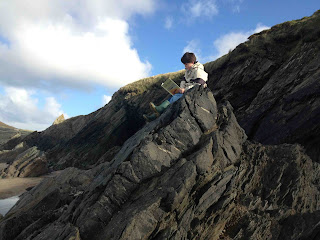 On Friday Dylan came home with a note from school. His teacher would like every child to bring in a photo of themselves reading in a cool or whacky place. They could try reading in bed, the letter suggested, or the bath, or the park; anywhere unusual to enjoy a book.

So we've been carrying The Sand Horse round West Wales as part of our weekend pottering. And Dylan's been reading on the beach, at the castle, in the antique shop... He's as much motivated by winning a prize for best location than a desire to bury his head, but it's fabulous he's taking an interest at all. 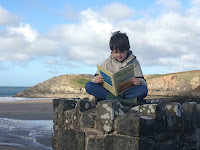 Dylan has struggled with books. At first, we thought it was a boy thing - more interested in trains than words - but it gradually became clear he didn't fully grasp the concept. Or perhaps more accurately,  he couldn't follow how it worked - spelling in particular would fox him. Early in his second year, his teacher commented on the gap between his above average vocabulary and below average reading skills.

We were lucky. His school was a pilot for the Every Child A Reader scheme and, with the help of a specialist, they brought him back to the expected standard.  It took three months of a very different approach to learning - which as an aside, helps take the pressure off anxious parents - but I can't think of a better investment in a child's future. I'm immensely grateful and Dyan will be too in time.

At the moment he's not fully aware of his good fortune. Not only was he blessed with a school that had extra resources for literacy, he also has intelligent parents who care deeply and take the time to work with him - though interestingly, in his case it wasn't quite enough. In the bigger scheme of things (and this isn't meant as any sort of boast) he'll benefit too from his social upbringing - three generations of education and encouragement will shape his future if not exactly define it. 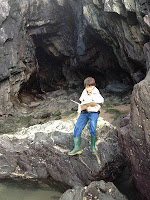 It saddens me when I see some kids - or rather when I see their parents. 'A poverty of expectation', was how someone once described it. We all know reading is an essential life skill - nobody in their right mind thinks otherwise. But I'd go further and say children have a Right to Read, and I'd like that idea to be more deeply embedded in both law and attitudes. It's very probable Dylan would have caught up anyway, but I'm glad it wasn't left to chance - and it seems to entirely right that it wasn't.

You might think as a writer that I've always loved words. It isn't so. I struggled with reading, and still find spelling an illogical chore. Unfortunately, my teachers didn't spot my potential quite so young! I could rant for pages on the damage done by the pedants who value correctness but are blind to creativity. But that's for another time.

This weekend we had some fun; we listened to CDs in the car; we played Dylan's imaginary 'talking game'; we spent hours on the computer and the Kindle... So many ways to read and tell stories - and amazingly, we even managed an old-fashioned page or two. 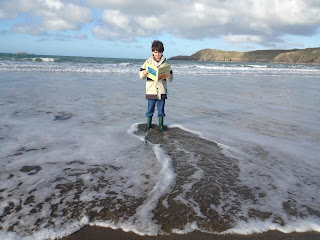