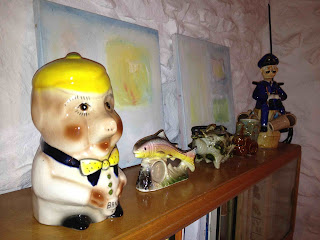 I like to think I have a good eye. While there's no objective standard for taste, my house and its decor often draw compliments. The comments on this series would suggest at least some of my collections are well chosen. Our middle son - style guru in waiting - steals my old jumpers, and even admitted that Sinatra was cool.

But when it comes to the ugly shelf, I'm generally on my own.

The shelf is where I keep all my best kitsch: items so tacky that no-one could possibly like them. No-one except me that is - although I suspect there's a repressed envy in some quarters. For the ugly shelf is more carefully chosen than first appearances would suggest.

For a start, no item can cost more than a few pounds.

Secondly, they have to induce a mild nausea when first examined - a cry of Gosh, that's foul, is a good starting point.

But it's not enough.

For thirdly, and crucially, that initial distaste must be tempered by a sense of '... but there's something about it...'

At this junction, I begin to reason that the dual qualities of beauty and revulsion are the essence of much good art. I point out that Francis Bacon talked often of how his better paintings made him feel sick; I mention Andy Warhol's love of cheap cookie jars; and I remind myself that Monty Python was so bad it was good - so too The Goons, Father Ted, Vic Reeves...

And usually, my internal reverie is interrupted by Jane declaring, buy what you like, but it's going on the ugly shelf.

Quite possibly, there's no greater compliment to bad taste.

Take for example the sailor brandy decanter - note the delicate drinking cups hanging on his barrel A bargain at three quid from the antique shop in Narberth. 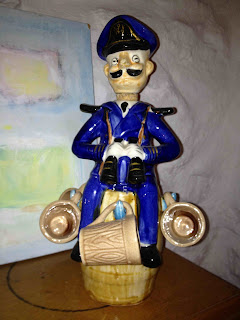 And have you ever seen a piggy bank, quite this gross? Two quid from Fishguard. 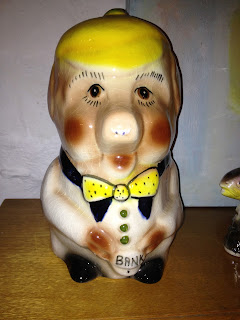 I first thought this was a dinosaur, and only later realised it's a miniature teapot. Fifty pence at Lacock car boot. 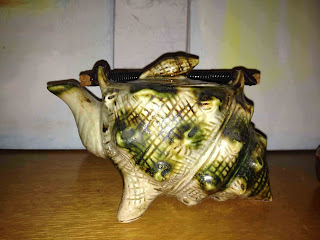 This thermometer is simply stunning - my current favourite and another Narberth special. 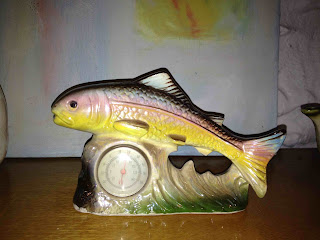 There's many more where these came from, like this egg cup... 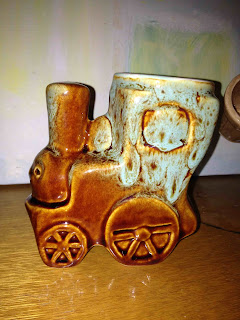 Interestingly, one or two items make it off the ugly shelf, back to the mainstream so to speak. They tend to be regarded as 'vintage' or 'rustic' - which in my opinion, indicates my judgment was out of sorts. For true ugliness should be beyond repair; it's beauty in the eye of only one beholder!

Have fun, whatever you collect.

P.S. The paintings in the background are mine, and no, they are NOT ugly or kitsch.
Posted by The bike shed at 5:59 PM