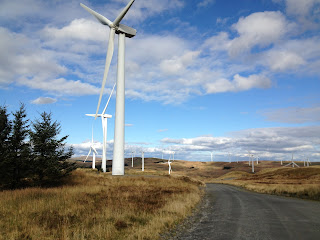 The first, with a writer who was once a prominent road protester. Would you have climbed those trees to stop the building of a wind farm, I asked?

The second, with a writer and environmentalist, as delightful as she was committed. I care most deeply about the landscape, I explained, my view on wind farms is really a matter of personal priorities.

And the third, with a writer whose generous mentoring has helped me more than any other. I've discovered the way to success, he said. Write nothing controversial, acknowledge all opinions and say bugger all of consequence.  He had a twinkle in his eye.

I recalled these snippets as I neared the summit of Pen y Garn on Saturday, walking on a treble-width forest track, five miles east of Devil's Bridge in the Cambrian Mountains. The 'road' leads to the Nant Rhys bothy, arguably the most perfect and isolated of all in Wales.

Of course, I knew what to expect. After all, I'd been this way before. I'd written of my hatred of the Cefn Croes wind farm, its impact on the landscape and the inappropriateness of its turbines. I'd gone so far as to say that before passing judgement every campaigner (for or against) should stand under one of the monstrous contraptions.

You'll understand then, I'm no fence-sitter on this issue - though it's fair to say that over recent years I've tried harder to listen to alternative views. Sometimes I even find myself nodding.

But as I crested the rise that visceral response hit me again... I began ranting to my walking companion... and again... reeling off photos... and again... spitting into my iPhone's voice recorder: fucking turbines.. and again... arrogant, criminal... and again... they make me want to puke..  I was listening to no one and to trucking no arguments.

And you know, I was glad about that. For in those few minutes of rage I felt more authentic than any amount of reasoned argument, probing questions or careful assessment of perspectives. I didn't give a toss for the technical reports available as pdf downloads, the website propaganda of the energy companies or the paranoia of the eco-lobby that positions windfarms as a binary alternative to nuclear-fuelled wastelands. Nor did I care about the European grants, the Welsh Assembly's Sustainability Strategy, or the 40,000 homes putatively benefiting from this 'clean' energy.

What I cared about was this place.

The Elenydd wilderness is one of the few mountain regions worthy of that epithet. The Cefn Croes windfarm is barely visible from the road, it takes miles of walking to get up close, it directly affects but a handful of homes and doesn't offend the tourist's windscreened view of Wales. And that's precisely why it matters so much.

This landscape is precious; it's rare and special, and I'm angry because we despoil it with industrialisation on a scale that would be unthinkable in any urban equivalent. This is wrong, and it's plain and obvious when you go there. But because most of you won't, I'd ask you to spend 14 seconds watching the video below.

Just sometimes it's entirely rational to follow our gut.
Posted by The bike shed at 9:58 PM