Nablopomo and survival of the (not very) fittest 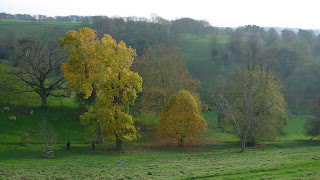 
Is it really the end of Nablopomo? This is the third year I've completed the challenge to blog every day in November and the month seems to get shorter each time. They say a sign of ageing is that time passes more quickly - it certainly doesn't feel like a year since last December.

My theme, loosely interpreted, was nature and landscape. I'm not sure that helped with the quality of the output, but I at least tried to show that nature writing can go beyond mere description. Many of the posts placed me (or you as a reader) within the story, emphasising the human aspect over hard science or detailed observations. Writing this way has become instinctive, but if I were to analyse it, I'd say it's an attempt to reflect how we respond to the natural world.

Last Sunday I went walking in the Cotswolds with Jane and some friends. We saw a hawk - a peregrine, I'm sure - hunting over a clearing on the wooded ridge. And my immediate reaction was to run over for a better view, leaving the path and my rucksack behind. For a minute or so I was captivated by it's rise and fall on the ridge, the way it held it's tail, the shape of its wings, the anticipation that at any moment it would strike. I didn't spend ages looking it up in a guide, in fact, I only realised it had been a peregrine when that evening I checked what we'd seen against the options. The point I'm clumsily making is that it is the response to the bird that interests and excites me most and I suppose that is what I've tried to write about.

But I'm feeling tired now and not a little 'natured out'. Earlier this week I was saying to my father in law that writing reflects a part of me - but not all of me. It is a mistake, I said, to conflate life writing with autobiography. I have never yet met a writer who is not more complex, and often more flawed than their work might suggest. I am no different - I have an interest in nature and art and philosophy but I'm far from some aesthete who wouldn't contemplate flopping in front of the TV. For the next few weeks I think that's what I'm going to do - and maybe hit the gym as well, because thirty days staring at a screen is not great for the heart rate.

Talking of fitness, I noticed there were quite a few bloggers who didn't stand the pace. Of those who came through, my friends Zoe (mind and language) and Michelle (veg plotting) both gave me encouragement and wrote superbly throughout. My thanks to them and to everyone who commented - it always makes a difference. My apologies if I didn't always return the compliment - just too much to do and not enough November.

So that's all from my Nablopomo offerings - I hope you enjoyed them and they stirred a few thoughts. No doubt next year's challenge will come round sooner than I expect, which will just go to prove that I really am getting old.
Posted by The bike shed at 7:23 PM