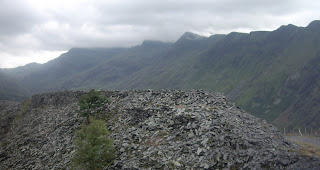 Snowdon from the Deiniollen quarries - it was sunnier last week.
On Friday, when half the nation was watching 'that wedding' I walked up Snowdon. It wasn't so much an act of protest as a simple opportunity to climb a great mountain on a fabulous day. Hundreds, possibly thousands of others, had the same idea.

Snowdon (or Yr Wyddfa) is of course the highest mountain in Wales. The massif consists of three distinct summits, arranged in a horseshoe formation, but it's the central peak that most climbers aim for. From the summit there are some of the most spectacular views in the UK.  I realised it was fifteen years since I'd last stood there.

My route took me up the old Miners Path, returning by a variant known as the Pyg track. Both are now scars on the mountain; their routes passing the industrial detritus of a lost age, as well as the disgraceful hydro electric pipes that are today's equivalent. On the final slopes is an incongruous and yet somehow not inappropriate funicular railway line, and to top it all is a dull, box-like, summit cafe. It must be one of the ugliest mountain tops in wales.

Snowdon then, is a magnificently flawed mountain. It has sweeping views and hidden corners that leave me breathless, yet within yards there's as much that brings me to rage; huge tracts are untouched wilderness, a small proportion so tramped that the rock steps need replacing. It reminds me of what a colleague said about Wales when I first came here, the ugliest and most beautiful place on earth.

Friday had its share of diversity too. I passed a man travelling barefoot, another in a ceremonial kilt; there was a lady whom, I assume for reasons of faith, was wearing an ancle length black hessian dress and matching headscarf (notably her husband wasn't burdened with this inappropriate garb). Finally, there was a couple carrying golf clubs to play pitch and put on the summit.

Actually, that finally isn't correct.  For there were hundreds more walkers in fleeces, families in shorts, lads in hoodies and girls in not much but tattoos. There were Welsh and English and Japanese and Dutch and Eastern Europeans and Americans. A toddler was having a strop because she wanted the picnic now!; a chap who looked at least ninety was swaying in the wind - he gave the impression that if he stopped he wouldn't start again.

And yet amongst all this it was someone else who was in my mind.

Almost thirty years ago, on the day that Charles and Diana were married, I walked with my grandfather up Windy Gyle in the Cheviot hills. It was the last proper mountain we'd climb together. I remember us arriving at the summit cairn to find a group of about half a dozen disaffected blokes all smoking pipes, you've escaped as well, they said.

We saw an adder on our way down and I recall my grandfather explaining how to use the intersection of the horizon as guide to your height on the mountain. I showed him where I'd camped wild when walking the Pennine Way and how I'd found water in a hidden gully. We had a shared love of the landscape that transcended other differences; obvious ones like age, but also attitudes to politics and ways of seeing the world. He was scientist; I'm a... well at that time I was probably all of a muddle.

And it was walks like those that helped me become a little less so. Twelve years later, when my grandfather died and soon after I first climbed Snowdon, I asked for his compass; it couldn't be found. No matter, for in a sense I'd already inherited it.

They say we don't change much beyond our teenage years, at least not our  personalities. It's the experiences we have as young people, what we are given and what is taken away, which fundamentally shapes our inner self. And thereafter, no amount of life's wear and tear can make much difference.

I'm not sure if that's scientifically correct. But sheltering under Snowdon's trig point on Friday, it felt about right.  And as I looked across its scarred slopes, over my half adopted country, towards the north and east, to the land of my father, it felt as true of this place as it was of my granddad, and ultimately of me.
Posted by The bike shed at 9:05 PM

Labels: About me, Special places, Wales