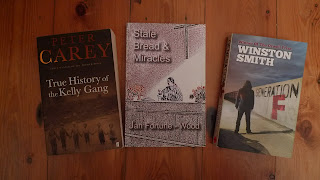 After a rather fallow winter I've been catching up with some better reads this spring - my enthusiasm renewed by the purchase of a garden swing seat that I've taken to lounging on; book in one hand, beer in the other, teenager doing the lawns... ah, that's better.  Here's a small selection.

First up is True History of The Kelly Gang by Peter Carey, a one time Booker Prize novel and the best fiction I've read in ages. It's written as a first person narrative, as if it were the 'authentic' voice of Ned Kelly, using little punctuation, a crude dialect and a disarmingly simple narrative style. The genius of this bold approach is that by chapter three I was so taken in I'd ceased to regard it as fiction.  Still now, it feels like its literal title - the true history of the Kelly gang.  A fabulous book and a monumental achievement.

I was delighted to be given an advance proof of Rory Maclean's, Gift of Time. This too is a story of which we know the ending, for it chronicles the last months of his mother's life after a diagnosis of terminal cancer. The book is presented as a diary of three voices - Rory, his wife and his mother -  each coming to terms with the inevitable. Paradoxically, it is a hugely hopeful story as each voice, in its own way, reaffirms what is most joyful and important in life. And its hopeful too in standing at odds with the modern tendency to relinquish old age and dying into the hands of others. The book is available for pre-order on Amazon or at book shops and I'll write a fuller review nearer its publication.

Jan Fortune Wood was one of the first women to be ordained into the Church of England. Stale Bread and Miracles is a series of prose poems that tells the story of how, from inspired and expectant beginnings, she came to leave the church, disillusioned with its politics, misogyny and plain lack of care. This is not a hopeful book, and typically not something I'd chose - but in fact I loved it.  By the end I wanted to clap and cheer- thank God you left, at last you saw the light.

On the subject of politics, I read James Whyte's, A Load of Blair in an afternoon on the sun lounger. I like Whyte, he's a rigorous thinker with the ability to make logic entertaining. His better known book, Bad Thoughts: A Guide to Clear Thinking, targets the nonsensical assertions of religion, the press and Government.  A Load of Blair, as the title suggests, takes a particular look at the spin of New Labour (with Blair as its master craftsman) and more generally the vacuous claptrap of modern political rhetoric. I guess most of us like to think we know, or at least can sense, when we're being duped - but this book dissects political rhetoric at a whole new level. It is relevant, funny and recommended if you like that sort of thing.

Winston Smith (not his real name you understand) was the winner of last year's Orwell Prize. A link to his blog is on my sidebar - it you haven't read it before, then prepared to be shocked, angry and a little lost at the desperate state of social care for young people in Britain.  Generation F is the book of the blog; an insider's account of (in his view) the counter productive, bureaucratic and wasteful madness he encounters as a care-worker on a social housing scheme. Smith paints a picture of a system so driven by political correctness and its own funding structure, that it is singularly failing at all levels - particularly its ability to offer any hope or answer to the most antisocial contingent, which he describes as 'feral brutes'. If I have one criticism it is the absence of a clearly articulated alternative - Smith's views on the current system are self evident, but a chapter setting out his vision for an alternative structure, funding and objectives would have raised the book to another level . You may not agree with all he has to say, but the Generation F is an eye opener nonetheless. 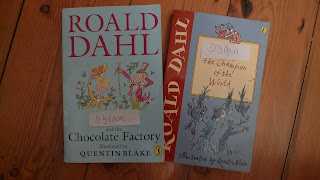 And finally Roald Dahl - never my favourite children's author, I'd always thought his books to be overly long and full of cliches. But what do I know; Dylan loves them. And together we pretend they are written especially for him. So we've read aloud Dylan and the Giant Peach, Dylan and the Chocolate Factory, Dylan the Champion of the World, The Giraffe the Peli and Dylan, as well as Fantastic Mr Fox (real name Dylan) and others. And in so doing I've come to appreciate Roald Dahl a little better; it's not so much the writing that matters - its me and my boy, reading together, hatching plots, flying peaches, poaching pheasants and squashing baddies; what stories should be I suppose.
Posted by The bike shed at 9:30 PM