A visit from the blog fairy - erm, VP actually 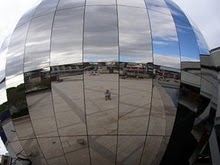 Picture from Veg Plotting
A week or so after I started the Bike Shed I Googled blogs from Wiltshire. Top of the list was Veg Plotting, describing itself as Musings from life in the heart of rural Wiltshire, well, erm Chippenham actually... It was ostensibly about allotments, not something I was hugely interested in, but I clicked to follow anyway.

It didn't take long to realise that Veg Plotting is about much more than allotments; it's about plants and gardens and the town I live in and funny adverts and serious issues; it's about someone with a passion for and an interest in life. Gardening might be the means, but the end is much more universal. .

VP is a blogging hero in my mind; she'd laugh at that, but I have watched and learned and shamelessly imitated many of her ideas. It was where I learned about comments and followers, and got the idea to use themes for continuity (see here for example), and always using a photograph...  Her blog is also hugely impressive from a technical aspect and I've long envied its three column format.

So how nice that VP herself should come and visit me today. Not in the blogosphere, but actually knocking on my door, coming in for a coffee, swapping pots of home made jelly (apple for quince), talking blogs and biscuits, wandering round the garden, offering ideas and advice.

And how great that someone you've come to 'know' through their writing should be just as you'd hoped. She describes herself as 'very much the amateur' and yet in only a few minutes pondering she'd given me more new idea and advice than I'd have thought of in months. And just like her blog, our chat ranged from the local to the national, from plants to people, from moths to trains, from birds to real ale...

I thoroughly enjoyed VP's visit. We've exchanged emails for a couple of years and must have passed in the street many times before - she lives about a mile from my house - but there's nothing like meeting up for real. And like the blog fairy she is, she brought me good luck - no sooner had she left than my solicitor confirmed the exchange of contracts on my old house, and then an email to say I was a winner in a writing competition (more of which tomorrow).
Posted by The bike shed at 7:40 PM