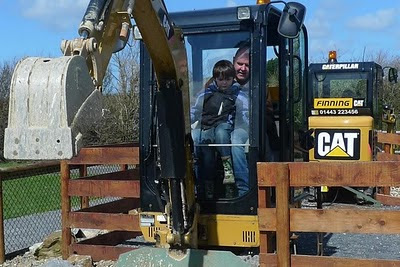 I was forty nine last August, not an especially important birthday, I thought. Except the cards said, Not long to the big Five Zero - enjoy it while you're able!. Another wag sent me a brochure for SAGA holidays.

What they missed is that I've always rather looked forward to turning fifty. For years I'd been planning to retire early, do a little travelling and go back to university. Those dreams were scuppered by a combination of supposed pension reform, the outrageous cost of housing and my concern for my children's future, such that I worry about downsizing. For completeness, Dylan coming along wasn't part of the plan..

But let's look on the bright side. I'm in my fiftieth year; financially stable, good job with a flexible contract, happy family, fit and healthy if a little softer round the edges...

That's not the point, said Kerrie, my colleague at work. It's your fiftieth year, so you must to do fifty new things before your next birthday.

Who says, I asked?

I do, she asserted - and believe me, there's no arguing with Kerrie. You have to do forty new things in your fortieth year, fifty in your fiftieth and sixty in your sixtieth - it's the new retirement.

No, they have to be new. I have a friend who planned it all out - had a fabulous year - even went to Boston for the weekend; didn't involve her husband at all.

It all sounded very exciting, but three months on I'm making limited progress.

The trouble is, I find it difficult to think of new things I want to do. There are old friends I'd like to visit - doesn't count; there are places I want to see again - sorry no; much the same applies to restaurants, books, mountains...

Kerrie allowed me the day I played in a banjo ensemble (weird but acceptable), and the time I drove a digger (so long as it was it a real one?); even the trip to Corfe Castle (ok, but no more castles - boring). Other than those I'm struggling. She says I'm a lightweight; I claim it shows maturity. More seriously, I think it says something about our varying needs for novelty.

My father in law has visited over 110 countries - he recently took to cruising because he'd run out of mainland destinations. A close friend  changes his job about every seven years because he gets bored. A few weeks ago I met a lady on a writing course who told me she was 'addicted' to the choice that London offered.

In contrast , another friend wrote last week, informing me of his return to France - it is achingly quiet there he said. His note reminded me of a Northumbrian shepherd I once knew, who had never been to Newcastle. In Wales, my neighbour, John Knapp Fisher, has spent half a lifetime painting within five miles of his home.

There is merit in both approaches. I ought to be more open to new ideas, but I also try to take inspiration and satisfaction from what is around me. Ultimately, I said to Kerrie, its a rich and fulfilled life that we should be seeking, however best we find it.

She was having none of it.

You're not entering into the spirit. All those trips to London; just think what you could do.

She is right of course. I need to pull my finger out; to be more adventurous; take more pleasure in the new...

In the meantime, I'm heading  'home' to Wales - just to think about it, you understand.
Posted by The bike shed at 5:22 PM