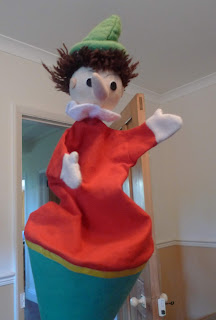 When my older boys were small I bought them each a cone puppet. They were from Paris, very expensive; the sort of toys that parents like. The boys thought they were spooky, and perhaps because they played so much together they didn't feel a need to involve other characters. Hence the puppets languished in a cupboard for a decade.

Dylan discovered them when he was three. Next to trains I'd say they are his favourite toys, especially Puppet Daddy, who Dylan insist is controlled by me. This is interesting in itself, because to Dylan the whole point of the game is to talk to the puppet rather than handle them.

Puppet Daddy speaks with a screeching Welsh lilt, modelled on Norma Price from Fireman Sam - Dylan won't let me change it. But he's a boy, I say. He's a puppet Daddy, Dylan corrects me.

He's a nervous puppet too, retreating often to his cone, especially at any sign of his nemesis, Boppy Jester. Boppy Jester speaks incredibly fast and plays the singular role of bashing Puppet Daddy on the head at any opportunity. And so the game goes on.

Puppet Daddy's great sadness was that he had 'no legs'. This regularly caused him, and Dylan, to cry. He couldn't go to school, or escape his enemies, or play football; he was confined to his cone and hours in the dark. Perhaps he could hop on his stick? I once suggested. You can't hop without legs Daddy... tears flowed. 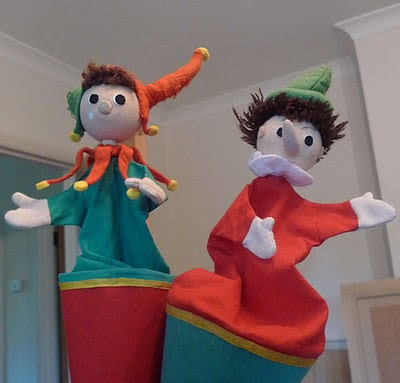 And so, Puppet Daddy has new legs. He remains nervous of course; after all, he is only learning to walk - and Boppy Jester is still to be avoided. But great was the joy the day those boots were found.

And great joy we have had together since: the mornings I've been woken with, Will you be Puppet Daddy now?; the ongoing saga of Boppy Jester (don't find HIS leg's Daddy - he'd be too boppy); the surreal time Puppet Daddy accompanied us to Wales and I spent the weekend talking in a high pitched woman's voice; the videos we've made, the cuddles, the laughs, the insanity of it all.

Almost every parent can tell you of a time they bought some expensive gift only for their little darling to spend more time with the cardboard box. I know very little about the psychology of play, but I suspect there is something important in allowing children to transcend themselves. The problem with so many of the branded toys, is that they are based on formulaic characters that limit possibilities and contain the imagination.

Toys like Puppet Daddy are different. They are about invention and sympathy and absolutely believing in and living with every turn and detail of the story. Nobody could design Puppet Daddy, he just was, and is. In a few short years he has grown into a complex, lovable, irreplaceable  character.

And as Dylan sneaked into my bed with him this morning, I realised how much toys can imitate life. 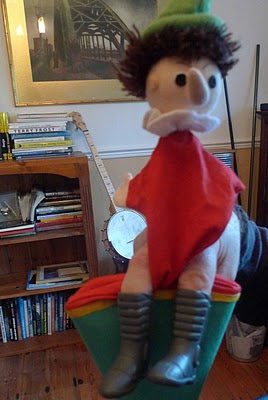 Labels: About me, Dylan, Family, NABLOPOMO