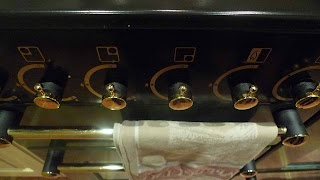 The artist Paul Cezzane said, 'if you have nothing to paint, then paint the stove.' His point was that to be inspired you need to practice. That the very process of putting pigment on paper will lead you to respond; interest and creativity will follow.

Writers know something of this too. Julia Cameron in her book, The Artists Way, suggests three pages of writing every morning which she calls 'morning pages'.  The process is close to writing as a stream of consciousness; your hand should never stop moving; you are not creating, simply reacting to the flow of your thoughts.

I wrote morning pages for two years, and coincidentally to this blog post, (which is being written with no idea where it is going) they are on top of a box by my desk. In a moment I shall photograph them - but, hold on, you've already seen the photo that I'm about to take ...

That's the sort of puzzle philosophers like, and it's given me an idea for a piece about the illusions words create. So already this post that was going nowhere has opened up some new possibilities.

But for all the tricks and techniques, sometimes it is serendipity that matters most.

Yesterday, taking some junk to my car, a blackbird took offence at me in 'her' garden. The closer I approached, the more agitated she became. She puffed along a branch, her cries receding as I stood motionless - until we faced each other for a long silent minute.

I'm not sure I've ever looked that closely at a blackbird. She wasn't black at all, but a sparkling umber, with a speckled chest and an orange ochre beak. Her head was cocked to one side, a green eye staring at me, staring at her. Blackbirds are one of our commonest species, I thought; we must pass each other every day. And yet I couldn't say which of us appeared the stranger to the other.

Our postman came ambling up our drive, and the moment was gone.
Posted by The bike shed at 6:42 PM