My father in law decided to be helpful this week, packing my books randomly into cardboard boxes in preparation for the move to the new house. I was thus saved five minutes work at the cost of losing a carefully organised filing system that he would have otherwise admired. Oh well, that's six hours distraction I can find this winter. He meant well, said Jane.

Today is the 'big move' so I'm writing this in advance - perhaps as a distraction activity too, for the thought of it is worrying. Jane's brother is coming to help; he has the attributes of being large, available and keen, but isn't known for the gentle touch. We've packed the raku already.

None of this has much to do with what I'm reading. Which is kind of appropriate as this autumn I've been distracted by other things. I have a wide selection of banjo manuals but they don't really count, and though I can only photograph the few books that were by my bed (the rest are in random boxes), there are not many more I can remember. 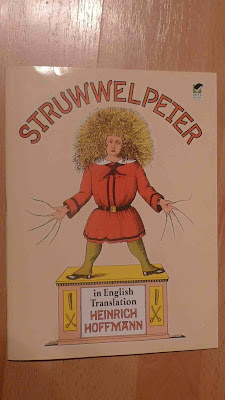 Except a quick mention that Dylan has been enjoying the copy of Struwell Peter that I bought him last week - highly politically incorrect, but superbly old fashioned cautionary tales. I especially liked the story of Little Suck-A-Thumb who get his thumbs snipped off by the long red-legged scissor man.

I've also been re-reading George Orwell's diaries, but I've written enough about Orwell in the past and everyone who would be interested knows about them anyway. Much more interesting is The Peregrine by JA Baker, a cult book amongst nature writers that has recently been rediscovered. I'd rate it as one of the most beautifully written texts I've read -  in fact, it is so good it makes you feel like giving up writing. Essentially a diary of watching peregrines, you wouldn't think it would appeal beyond the birding community. Yet Andrew Motion writes the cover blurb and whole list of writers now quote it as a seminal influence. Here is the opening paragraph - read it slowly.

East of my home, the long ridge lies across the skyline like the low hull of a submarine. Above it, the eastern sky is bright with reflections of distant water and there is a feeling of sails beyond the land. Hill trees mass together in a dark-spired forest, but when I move towards them they slowly fan apart, the sky descends between, and they are solitary oaks and elms, each with its own wide territory and winter shadow.  The calmness, the solitude of horizons lures me toward them, through them, and on to others.  They layer the memory like strata.

After that, everything else pales a bit. Even the excellent Alun Richards' memoirs of his childhood in Dai Country. Or Kasuo Ishiguro's An Artist of The Floating World, which is much like his better known Remains of the Day. And the weirdness of Bugs Brittanica, companion volume  to Birds Brittanica (also in random box), both of which are a strange mix of coffee table and enthusiasts guide.

Finally, I re-read the Raymond Chandler's The Big Sleep (another random box), which also has a brilliant opening paragraph: It was eleven o clock in the morning and the sun was not shining and a look of hard wet rain in the clearness foothills... I was calling on four million dollars.

Talking of big sleeps, with tomorrow looming that's just what I need right now.
Posted by The bike shed at 1:00 AM