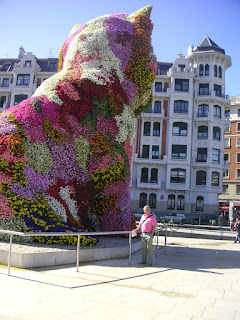 Guess where this is?
Today, someone stole my thunder. Specifically, it was the Zoo Archaeologist with her post on good museums for children. So bang went my plan for a quick list and an early night. The only consolation is that as she works in a museum, and presumably knows a thing or two about good ones, it's gratifying that her list is close to the one I'd have written.
I suppose I should add few.
As a child I liked the museum at Keswick, which had a 600 year old cat in a casket. In my home town of Newcastle there is the excellent Hancock Museum where the curator was far sighted enough to let a future blogger spend hours with the collection of moths. Another good one is the National Media Museum in Bradford. And in Swindon there is an excellent collection of contemporary British paintings - a great example of a small town focusing its resources and gradually building a quality collection.
We all have our favourite museums, which will often reflect our interests. I once went to a museum of teapots in Conwy; there is a museum of quilts in Bath that my mother couldn't wait to visit; there are no doubt museums of odder objects than these.
And that's an interesting point, because it seems to me that some museums have forgotten the importance of the object. In fact, they seem determined to put as much between you and the display as possible, explaining and contextualising, instead of letting you get on and look at the darn stuff. It reminds me of poetry readings I've been to, at which the writer feels the need to mumble on about the poem before they recite it - just get on with it for God's sake!
To me, it is the objects that make museums worthwhile - not the gizmos and story boards and pull-this-press-that light emitting displays which take away from why I went there in the first place.
Last year I went to see the Terracotta Warriors at the British Museum. 'Would I like some headphones,' the young guide in branded t-shirt asked as I came into the display room. No thanks, I said, I was here to look, not to listen to something I could read later. The guide looked at me askance; I was the only person in the room without them. Later I asked him a question about the display. He couldn't help me; his job was to give out the brochures.
Art galleries tend to be a little better, though most have irritating plaques beside the pictures; have you noticed how seldom they say anything about the paintings - more usually it as about the artist. And galleries are one of the worst culprits for the headphone phenomenon. The recent Francis Bacon exhibition was full of people in ear candy nodding sagely as they stared at the triptych of George Dyer puking in the bog. Did anyone seriously think that was how Bacon intended them to be viewed?
Worst of all are those museums which seem to have forgotten about objects entirely. The Tate Modern is like this - nice room, pity about the furniture - though it is saved by its visiting exhibitions; the Tate Britain has a vastly superior collection of work.
But sadly, my prize for the 'worst ever museum' must go to Wales and the National Waterfront Museum in Swansea. This multi-million pound white elephant is so full of computers and interactive displays that they have forgotten to put anything in them - it's a sort of virtual museum. Dreadful!
And especially dreadful, because getting it right is not that complicated. What child ever forgets the dinosaurs at the Natural History Museum? Or the model of a Blue Whale in the room next door? And what about the Rosetta Stone at the British Museum, or almost everything at the V&A...
These are what we come to see. It is the objects that inspire. And therein lies their value.
Posted by The bike shed at 6:25 PM