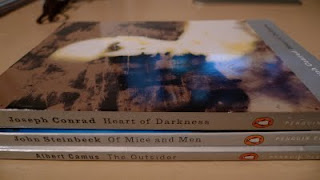 The novella is a strange beast; longer than a short story but shorter than a novel, it risks padding out the former or skimping on the latter. Definitions using word counts vary and don't entirely suffice; novellas also tend to have a singular focus and lack the complex perspectives of novels. According to Wikipedia it is not a popular format in English speaking languages.
But that doesn't make the novella less important. Indeed, some of the best books I've read would probably qualify as novellas - scanning my bookshelves I can pick out: Steinbeck: Of Mice and Men, Kafka: Metamorphosis, Conrad: Heart Of Darkness, Bellow: Seize the Day, Orwell: Animal Farm, Camus: The Outsider, Hamid: The Reluctant Fundamentalist, Graham Green: Loser Takes All, Hemingway: The Old Man and the Sea.

And on my desk is another one: Sandor Marai's Esther's Inheritance. I read its 148 pages yesterday morning, and intend to do so again tonight. It is a stunning book which explores Marai's signature themes of love, regret, and what it is to be truly alive - all concentrated into a single epic incident.
That incident is the return of Esther's ex-lover, a fantasist and scoundrel who all but destroyed her twenty years ago, and who reappears to rob her of what little she has left. I'm not giving anything away in that summary - it is laid out on the first page - because the real subject is... well, you'll need to read it to find out.
Sandor Marai was a celebrated Hungarian novelist who came to fame in the Thirties. He was later persecuted under communism before escaping to exile in the US; in all he wrote over 80 novels before his suicide in 1989, weeks before the fall of the Berlin Wall. Marai was 'rediscovered' in 2002 with the translation of Embers, one of all-time my favourite novels.
Embers is also centred on a single incident, this time a meeting of old rivals; plot wise, it makes Kazua Ishiguro's The Remains Of The Day seem complex! The comparison with Ishiguro is also not entirely out of place: the narrative tension in both author's work is largely internal to the characters, and the writing is equally sublime - except Marai was publishing fifty years earlier.
Since 2002, two more translations have been released: Conversations in Bolzano and The Rebels. Both are fine books but to my mind they don't come near the quality of Embers. I was beginning to think that Maria was a one book wonder. However, Esther's Inheritance proved me wrong; it is a return to his ambiguous, thought provoking, brilliant best.
Posted by The bike shed at 6:49 PM