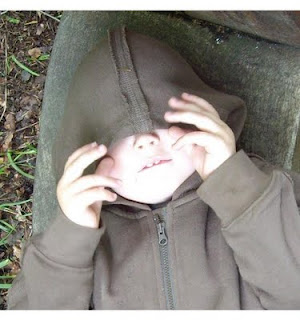 Jane was making lunch as I worked in my study on Friday. 'What are we having?' I asked. Just some ham and pickles. 'That's nice, isn't it,' I called to Dylan, who was at home because of a Teacher Development day. 'Oh, I don't know,' he sighed from the dining room next door, 'It's all fuck fucky fuck!'
There was moment's silence; my fingers stopped typing as I sat back to consider his reply. Jane, who is less contemplative about these things, came storming in from the kitchen. 'Who told you THAT word? It's a VERY naughty word.' You can imagine what followed.
Evidently he'd heard it at school - or so he says. Someone taught him it, but he's not sure who. Jane left him in no doubt that regardless of where he'd heard it, if he wanted tea, TV or indeed any sort of niceness he's better not use THAT word again. He's been at school a month, she moaned, and look what happens. At least Dan and Mike took about a year!
I tried a little diplomacy. After all he has no idea what the word means - and to be honest his Dad's pretty free with the odd 'fuck it' and worse when things go wrong. 'We're having none of your clever stuff, over this,' said Jane. 'If his teachers hear him speak like that, he'll be in big trouble. And in any case it's rude and uncouth.' I've learned when it's best not to argue a philosophical point.
All was soon smoothed over,the incident put down to a one-off. Until early on Saturday morning, when Mike was winding him up in a big brotherish sort of way. 'Stop being a fucker,' Dylan shouted from his bedroom. I turned over and looked at Jane...
Five minutes later Dylan was in no doubt at all about the F word and it's multi-variants. There would be no beach today, and no ice cream -there was even talk of soap and the washing of mouths. I stayed out of it, silently suppressing a smile at the accuracy of his comment to Mike. After all, he was being a nasty... brother. I doubt we will hear the F word again though, at least not for a few years.
Some parents get very wound up over swearing. I've seen mothers demanding to see the teacher, speak to the the Head, squaring up to other mums in the playground -on one occasion swearing so liberally it was fairly obvious where the bad influence might have come from. I'm more relaxed; it's a phase kids go through and usually a few tellings off will sort it. If they knew what they were saying it might be different, but frankly, Dylan could just as easily have said 'Tickety boo boo boobies'.
Jane wouldn't like that either. And neither would I, for though I might be bit less outraged than her at the F word, I basically agree: swearing is rude and uncouth -and somehow particularly so in children. Jane almost never swears and we none of us would in everyday speech. If I occasionally let fly, it's through anger or a stubbed toe - come on, everyone swears when they stub a toe, don't they? As my Mum would say, it's common.
I think the the subtleties of language are best left to adults; as far as Dylan is concerned it's a case of do as I say, not as I do. Which he's generally taken to heart - certainly he was repentant yesterday. And in the afternoon, as we gathered for some tea, he sat in his chair uncommonly silent - before letting off a long, and I have to say melodious, fart! Jane stared daggers at him as the three of us bigger boys suppressed our giggles. He looked at each of us in turn...
'Pardon me,' he said.
Posted by The bike shed at 2:00 PM