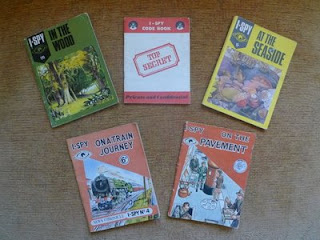 A nice little collection this one. I bought most of my I-Spy books from ebay, averaging less than fifty pence each and once winning a job lot for 10p. So not a big investment, but I cherish them nonetheless. 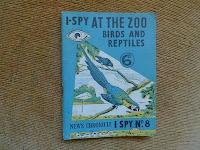 Initially, I thought they would be fun to keep at my house in Wales; the boys could play with them I thought, though in practice they were never much bothered. It was me who liked them - so I kept buying them long after there was any pretence they were for anyone else. I don't have large collection, about thirty or forty I suppose, and they are far from perfect; most of them have been scribbled in by children who are probably grandparents now - but I like that, especially if they have the certificate on the back cover, signed by their Mum or Dad. 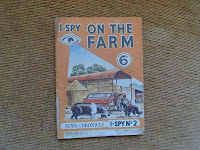 It's all nostalgia I suppose. The early ones conjure up an era when the News Chronicle was still in circulation and families took Sunday runs to the country in their Morris Minor or in our case a Singer Vogue (huge thing with green leather seats and a walnut dash). Later editions remind me of the Seventies when my Gran would still insist on buying us an I-Spy book at
Christmas, even though we were teenagers and there wasn't an edition called I-Spy Girls - this being the only subject about which we kept records and scored points; that however, is a whole different story. 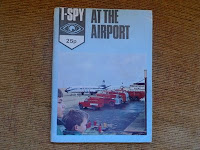 Some of the items in those early books could be from another world. I especially like I-Spy On The Pavement: gas street lamps; the police boxes; the rat catcher going down a sewer. Imagine what might be in a modern day version: dirty needles; CCTV; steel shutters... It's sobering too to note the points available for spotting certain wildlife - only ten points for a stoat, fifteen for an otter, ten for cuckoo. The same with butterflies and birds, many of them rare today.

The subjects didn't change much over the years: On The Train; In The Woods; At the Airport; At the Seaside. Then the occasional modern addition, such as Football or Spaceflight and my all time favourite I-Spy Dinosaurs with David Bellamy (Fifty points if you spot Dinosaur droppings. Where exactly?). There were specials too - the Code Book for example which includes Big Chief I-Spy's special Order of Merit for I-Spy Braves. 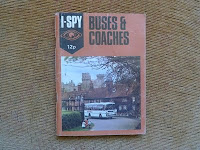 Of course, these pocket money books had fallen out of fashion by the Eighties and though there has been a modern revival, the new ones are not the same. The premise of the books is wonderfully simple, but somehow a remake doesn't do it justice. And we've moved on; lost something no doubt, but gained lots too. Best left as bygones I think.
Posted by The bike shed at 8:56 PM