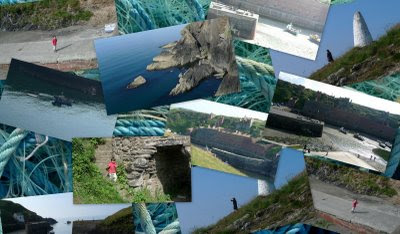 Of all the places I return to, the cliffs above Porthgain is one of my favourites.

Tonight the sea was calmer than I've seen it in years, the rocks lapped by the occasional soft ripple, boats lilting in the harbour beneath the derelict stone hoppers. At the white tower, where I've painted in gales, there were midges - and a few Painted Ladies flitting between the thrifts, their colours pale though it is only June. I looked for seals but saw none.

Each time I come here I seldom do much. Tonight, I sat by the pier watching my family: Dylan was playing in the lime kilns; Jane was gazing at the sea; Mike was hiding in the rocks and calling for his brother. We walked to the headland and looked towards Strumble - the water dissolving into the sky so that only the land formed a horizon.

Later, we had a drink at the Sloop, but I didn't want to stay. Too many posers I said, though Jane reminded me it was quiet tonight; relax, she suggested, why not have a meal? I said I'd rather we ate at home - which we did. It was enough to have seen what was new; the village shop re-opened - the things that were not; my paintings unsold in the gallery - and to be familiar again. 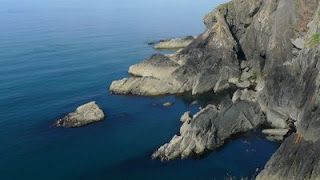