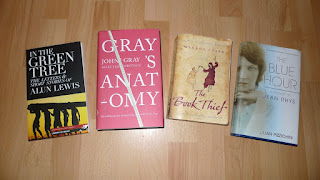 I seem to be reading a lot of dark books recently.
The Book Thief by Marcus Zusak came highly recommended. My friend Jeanie Thomas (great painter) said it was the only book she'd ever wanted to read twice. I'm not so sure. It is unremittingly bleak and yet quite gripping in parts. The story of an orphan girl in Nazi Germany who steals books, hides a Jew in the basement and whose friends and family are gradually killed off throughout the book - all narrated by the Grim Reaper. The style is a bit trendy for me - interestingly, it won a lot of prizes for children's fiction - and I tend not like to fiction that has a heavy narrative theme. So recognising I'm not someone who would typically like this sort of book - I'd say, good, but not all it was cracked up to be.
In the Green Tree by Alun Lewis is a collection of the letters and short stories of the welsh poet. Lewis died in Burma aged only 28. He was gifted writer, confident of his ability. These are crafted letters, carefully edited and chosen by his family and republished in the Library of Wales series; there is a poignancy in knowing he died only hours after writing the last one. I liked the letters more than the stories which came across as dated, and frankly, not that interesting. George Brinley Evans' stories of Burma (Boys of Gold), don't receive the same acclaim, and yet they are somehow more real and sensitive.
Gray's Anatomy by John Gray. No, not the TV series, the philosopher John Gray. Gray is one of the foremost thinkers alive today - his best known book, Straw Dogs (nothing to do with the film of same name) is a pessimistic account the possibility of human progress. Grays's Anatomy is a collection of his best essays, covering a breathtaking spectrum of subjects and delivered with a force of intellect that takes you back. Very quotable too; here is a line from Straw Dogs:
In the world shown us by Darwin, there is nothing that can be called progress. To anyone reared on humanist hopes this is intolerable. As a result Darwin's teaching has been stood on its head and Christianity's cardinal error - that humans are different from other animals - has been given a new lease of life.
Gray's analysis is often grim, but it's difficult to find fault, no matter how much we might wish it otherwise. Tough but impressive.
Flat Earth News by Nick Davies. A biting critique of modern journalism and why we get such absolute rubbish in the media. Shocking too, in its analysis of the media (particularly newspapers) and the misuse of power and influence. At times Davies is a bit self absorbed, over emphasising journalistic issues (I'm not sure that people lament the decline of the Sunday Times Insight Team in quite way Davies does) , but overall this is a powerful and important book.
Cardiff Dead by John Williams. A story of Cardiff low life, set at the turn of the millennium interspersed with flashbacks to the late Seventies, Ska bands, the pubs and clubs of that era. If you knew Cardiff at that time you'll probably like this book; if, like me, you were aged eighteen in 1979, you'd like it even more. Basically, a page turning thriller with some good characters. That said, it's second rate compared to Niall Griffiths - he does real low life.
The Sonnets, by William Shakespeare. I don't generally like Shakespeare; I've only ever read two of his plays and never seen one performed. I hate all that thee and thou and thine, even though I know I should just get over it. But the Sonnets are on my Sony Reader and I've found myself dipping into them recently. What I hadn't realised was how focused they are on death and mortality as well as love. Reluctantly, I'm enjoying these.
The Blue Hour by Lillian Pizzichini is a biography of Jean Rhys (who wrote Wide Sargasso Sea) My friend Sara wrote about this book more eloquently that I ever could - see her blog. It's a bit thin as biographies go, but my interest in Rhys carried me through. At times its a depressing read: if Zusak's, Book Thief is unremittingly bleak, then Rhys's life follows much the same theme. The difference is that much was self inflicted and the result of self pity. I love Jean Rhys's writing and I desperately wanted to like her too - but I found myself losing patience and sympathy, as did most of her friends in life. But they say tragedy brings forth great art, and on that level, Jean Rhys's novels compare with the very best.
That's all for now. On my desk at the moment is Arthur Koestler's Scum of the Earth, Alain De Botton's Architecture of Happiness and Jonathan Little's The Kindly Ones which looks so comprehensively depressing that I'm not certain I can bring myself to read it.
I think I need some light relief.
Posted by The bike shed at 9:14 PM