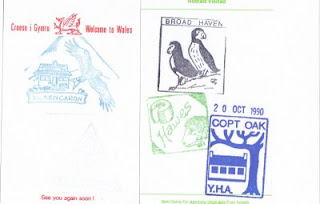 I'm not a great one for keeping things; I don't like clutter and I'm regularly accused of being over-zealous when it comes to the tip run. One of the last ways I'd have thought to describe myself is a 'collector'.
But in fact, I've quite a number of odd collections. I say odd because most of them are not collections in the normal sense - the sort you'd build from visiting antique fairs and the like - and frankly, because some of them are verging on the weird. But they are important to me, and I suppose I look on them the way a true collector would: they form a set, I take pride in owning them, and they have a value that is intrinsically linked to when and how I acquired them.
Last night I phoned my friend Ian to arrange a walking trip to the Lakes. We're booked to stay at Black Sail Youth Hostel, high above Ennerdale. You have to walk over Great Gable to get there and we plan to visit on the longest day in June.  It should be fantastic, so long as it doesn't rain. But it won't matter if it does, for the real reason we're going, is to get the stamp!
I started collecting hostel stamps in the Eighties. It was a bit sporadic when the kids came along, but gradually the 'list' has grown.  (Not as impressive as Ian's mind; he's managed more than seventy, though I think mine scores heavily on quality.) Last year, I was particularly delighted to get the stamps from two hostels in Mid Wales that I'd assumed were closed. I keep my collection in a little wallet in my desk, occasionally rearranging them and deciding which I like best; I even have a list on the computer.
You can always tell the collectors at hostels; they insist on doing the stamping themselves - and will spend hours comparing their favourites and swapping stamp stories with anyone daft enough to enquire. Small is beautiful seems to be the general agreement, and it's good form to put the date of your visit by each stamp. And did you know you can still get the special collector books if you ask...
Not many will have a stamp from Copt Oak; it's the pride of my collection. A tiny hostel in Leicestershire (sadly closed) it had old bus seats for chairs in the common room.  When we stayed a cyclist turned up with a dead crow in his panniers - which he proceeded to pluck for cooking.  We left for the pub.
Another good stamp is Bryn Poeth Uchaf - the hostel was a mile up a track, water limited in the summer drought, lit by gas lamps and when we visited, a hairy bloke who locked himself in the back room all night (plucking crows, for all we knew).  It was the only time I've ever known Ian actually suggest we went somewhere else.
Of course its the memories I really collect. Of cycling over Mid Wales with Jane (Blaencarron), of Foxy's rubber overtrousers (Hawes), of New Year with the Tandem Club (Kendal), of running up Snowdon (Snowdon Ranger), of the time trails and hill climbs on the tandem (Cambridge,Llangollen), of climbing in the hot summer of 91(Eyam) of Ian explaining why men had nipples (Malham) of the Man vs Horse race (Bryn Poeth), of Stuart's 'oh it's only a bit lumpy' (Corris), of Beaver Woman and the Christian Missionaries (Tyn Y Cornel), of the rainbow over High Cup Nick (Dufton)...
The stamps have no value in themselves, but when you think about it, what does?  If I hadn't got these, I wouldn't have some of my best friends; I wouldn't be who I am; my life would have been poorer. In that sense, they are some of my most valuable possessions.
Posted by The bike shed at 2:28 PM