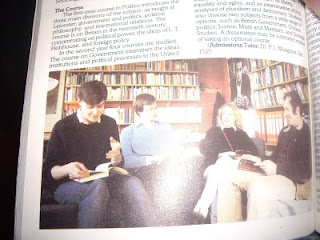 Leicester University philosophy prospectus 1983 - that's me on the left!
When Michael was small, we asked him (as you do) what he'd like to be when he grew up? 'A hairdresser and a chair,' he replied. We used to tease him about this, and it wasn't long before he'd changed chair to 'Chairman', realising this better fitted our middle class expectations; no further mention was made of hairdressing.
All this seems so recent that it came as a shock when he returned home from school with a list of subject choices for next year's timetable. The literature and advice from the school was interesting.
What struck me most was the emphasis on career planning. There was extensive detail on how certain subjects would open up opportunities in the job market. There was data too - indeed there's always been data from the school (most of it incomprehensible, but impressive to some no doubt) - detailing how many A-stars were achieved last year, what were the percentage pass rates, etc., etc.
There's fierce competition for the best pupils. At the open evening, one teacher went so far as to say that their subject was 'gold standard' so far as universities were concerned. True perhaps, but how about telling Michael why it is interesting to learn about history, or geography, or drama...?
I'm not generally critical of developments in education, rather the reverse. My boys' school is a shining example of how standards have improved. It's just disappointing that the school doesn't seem to have the confidence to promote learning for its own sake. Even for thirteen year-olds, the school seems to believe that what matters most to their parents (for I'm sure it's largely targeted at them) is the extent to which their children's subject choices fit into a wider career path.
Universities are just as bad; a recent prospectus that passed my desk was full of the jargon and pseudo babble of business. It gave more prominence to the KPIs on post graduate employment than it did to the subjects it had to offer. The implication was crass; studying here is a means to an end; after all, what else would you want? Well, what about the difference that knowledge can make to your life; what about learning because it enriches you in more ways than money?
Perhaps I shouldn't be surprised. I recall one of the mums at the boys' junior school priming her son with past papers in preparation for the year-six SATs. Only a few years older than this unfortunate child, one of the graduate trainees at work told me he'd chosen his degree course (business studies with accounting or something equally dull) because, from an early age he'd known he was going to be passionate about logistics. Oh, get a life!
I can't think it's coincidental that so many people drop any semblance of interest in academic study once their qualifications are in the bag. Amongst my work colleagues there's a host of degrees and professional qualifications but the main topic of conversation on Mondays is last weekend's football. I'm branded an 'intellectual' because I read a few books and write a bit. The irony is that the business community then spends a fortune trying to convincing their staff of the benefits of 'lifetime learning'.
I hope I'm not snobby. We all need down time, there's nothing wrong with football and it would be an odd world if we sat around discussing Schopenhauer on a Monday morning (fascinating though he is). Underneath the banter I find that people have all sorts of interests: my PA loves Shakespeare; a close colleague collects Moorcroft pottery, another became animated today as he told me of the year he spent studying locusts, my boss speaks excellent French, my previous boss painted watercolours. But I do think it is sad that these interests are often hidden, and at worst repressed - something to dreamed about, but not acted on; like my own secret wish, to have been a baker.
There's hope though. Yesterday I walked with Michael along the cycle path at Calne. It was evening and the bats were coming out, moths too. The dog scampered after a squirrel and I almost thought we'd lost her. Michael talked of his interest in drama, and painting; how he liked history and the way it explained the present; the new subjects he'd like to try; sports too. Never once did he say this or that would be good for getting a job; we didn't discuss pass rates; it didn't matter what other people thought was cool. And we neither of us mentioned hairdressers or chairs.
Posted by The bike shed at 6:32 PM