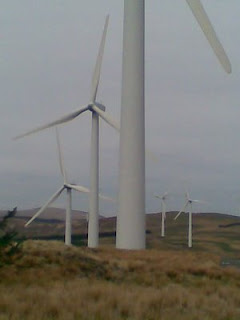 '...the torrid despoilation that is the Mid Wales wind farms.'

The philosopher Mark Vernon draws attention on his website to a speech made by the Archbishop of Canterbury. The speech, which focused on climate change, argued the need for a new kind of intelligence; an intelligence that can save us from our worst excesses.

It was interesting that the speech should come from the Archbishop, as only this week I'd been musing on how the green movement increasingly resembles a religion. My thoughts were prompted by an email from a friend, alerting me to a group of young people who are planning to tour the country on bikes, spreading the environmental message. As I looked at their web site I felt increasingly uneasy but wasn't sure why: here were a group of committed people, talking about an issue they felt was important – what's wrong with that? Nothing - except it all seemed so horribly evangelical. They reminded me of a Church Youth movement; spreading the Word, all happy-clappy and inclusive – providing you don't question their particular green gospel.

Much of the green movement seems to me to be quasi-religious. Its mission provides a meaning and purpose in life (what greater goal than to save the world); it has its high priests (Lovelock, Kumar) and its demons (Bush, Enron); it preaches an apocalyptic vision, the need to redeem our sins and be born again… I could go on, but the point is made and analogies only take us so far.

Thinking about this I understood the reason I had felt so uneasy. Religions are notorious for quashing debate (except on their terms); for valuing faith above reason; for embracing supporting evidence but rejecting that which counters. In short, religions are bad at science, bad at tolerance and bad at analysis. They are good at lots of things too (wars, censorship, repression) which gives a certain irony to the Archbishop's notion that we need saving from our intelligent excesses.

It seems relevant that I started this post with reference to a philosopher. For in all the discussion on climate change, my feeling is that there is very little which is grounded in good clear philosophy. We know what is happening to our climate and we are bombarded with solutions and calls to action. But we hear less about why we should care – about why our current environment is so special that we should be compelled to save it, now? If I climb to the top of Carn Lladron, a mountain near my house, I am standing on rocks that were once a sea cliff – why is it that we have to save it as it is? These questions are deliberately naïve, and there are obvious answers to many of them – such as the moral imperative to avoid the human suffering that unfettered climate change would bring – but that doesn't mean we shouldn't ask them, for it is often in the fundamentals that we find the principles to guide us elsewhere.

It is tempting to leave these questions hanging, for committing an idea to writing leaves us vulnerable to criticism. In that respect I applaud the Archbishop despite thinking that most of what he says is bunkum. For my part, I believe we should strive for an environment that maximises human flourishing – sure, that means carbon reduction on a big scale, but it also means protecting those wild landscapes that nurture our sense of wellbeing. And if we had followed that as principle we might have thought twice about the torrid despoliation that is the Mid Wales wind farms – I hope the evangelical youths ride past them on their pilgrimage; it might give them pause for thought.