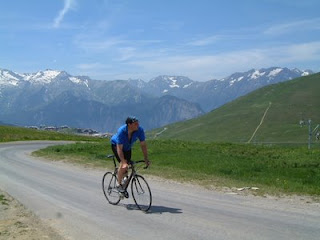 My friend (and blog follower) Sara writes in her erudite blog that we are never too old to regain lost skills. She says there is a mindset that believes we peak early, especially at physical skills, and that this mindset is rubbish! I feel like I want to disagree, but that's probably because I'm a bit of a pedant, or maybe more truthfully, because I'm nursing a torn hamstring after taking up running again. However, her central point – that there is no reason why age should deny sporting excellence – is well made, and in my case, a timely reminder as I ponder what next.

It's significant, I think, that Sara's return was to horse riding – a perfect example of what I call a piloting sport. Piloting sports can involve considerable skill and physical fitness but providing the 'motor power' is not the job of the participant – so motor racing is a piloting sport, so is sailing, show jumping, etc. These seem to me to offer greater possibility as 'sports for life' with the opportunity to continue performing at a high standard as we get older – certainly, more so than say, rugby, gymnastics or basketball.

My grandfather took up sailing in his fifties and gliding soon after. He used to say, somewhat disingenuously, that anyone could take up these sports, no matter how decrepit they were; perhaps so, but in his case he won many trophies against younger crews and stayed active in both sports until he died aged eighty four.

Sports of skill and accuracy regularly provide champions with no respect for age. Snooker has long list of older greats – think, Ray Reardon and Joe Davies – as has bowls, darts and even golf (though less so). When I was marginally involved in sports funding for Wales it used to make me smile that the Welsh Quoits Association was given a grant each year, but hey, why not?

Outdoor pursuits have similar possibilities, particularly where experience is as important for your chances of success as physical prowess. Many mountaineers reach their peak (ha) as they get a little older; Doug Scott, Kurt Diemberger, Reinhold Messner, Don Whillans and legions of others. Closer to home, my friend and one time coach, Stuart Woodward, was kayaking some of the world's largest rivers in his forties and continues to do so fifteen years later.

Indeed, where endurance is concerned there is evidence that being older is an advantage. Marathon runners tend to peak in their early thirties and ultra distance runners even later. Mike Cudahy, the first man to run the Pennine Way in under three days – an astonishing feat when you think about it – did so, aged forty five. His physical and mental preparation is described in his excellent book, Wild Trails to Far Horizons and it's an inspiration for anyone returning to run. Similarly, Joss Naylor the infamous fell runner was setting records well into his fifties that would stand for decades.

And what of cycling? The fact is, the very best cyclists are relatively young, and at the elite level I don't think that Sara's hypothesis is true – Anno Domini takes its toll on power and heart rate, no matter how many hours we put in. But one of the wonderful characteristics of cycling is the way it attracts and retains its enthusiasts for life. They say you never forget how to ride a bike, and that's amply demonstrated in my club where we have active members ranging from eight to eighty. One old boy, who looks at times like he's about to keel over, regularly tells me about the latest 200 kilometre ride he's just completed.

As for me, yes I'm still nursing the hamstring after it pinged in my sixth week of running following a seven year layoff. But that aside, Sara is right, it's surprising how the old skills come back and how rewarding it feels too. I no longer think of personal bests, at least not in terms of minutes per mile – but there's still much I'd like to do: such as running those few sections of the Pembroke Coast that I've yet to complete. And perhaps the long ridge above Llantony, the one that bounds the Golden Valley and ends at Gospel Pass – I picture myself running there at dawn, the path dropping towards Hay Bluff, mist thinning as the sun rises... An excellence of sorts.