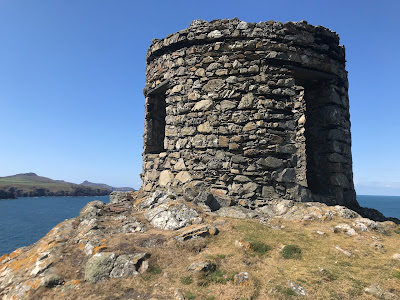 Near to my house is the beach and former quarry of Abereiddy. The works have long since gone, its slate not of the best quality and the difficulties of extraction adding to its demise. Indeed, like the neighbouring village of Porthgain, the quarry is arguably more successful as a post-industrial beauty spot; their crumbling relics a picturesque and poetic reminder of the immensity of the sea.

You either get it or you don't.

The quarry itself is now flooded and universally known as the blue lagoon on account of the water's aquamarine colour. It's become a popular spot for coasteering and tombstoning and more recently the putative sport of wild swimming. At their highest point, the walls are more than a hundred feet high and are occasionally used for extreme cliff diving championships. 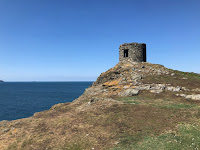 Most visitors come to skim stones, to walk the cliffs to Ynyss Barry or perhaps on to the Sloop Inn for a pint and crab sandwich. It's a magnificent stretch of coast, the arc of the sea on your shoulder, choughs rising and falling in the breeze if you know where to look; the rock doves watchful for a peregrine overhead.

But I wonder what percentage of visitors ever visit the derelict round tower on the headland? It must be in almost every one their photos, however, is difficult to reach, requiring a short scramble that deters all but the most nimble—or the knowing, for in fact the scramble hardly merits that name and the view from the point is the one of best there is of the St David's peninsula. I went there this week, keeping tight rein on Oscar, as we climbed the loose steps to this remote West Walian oddity. 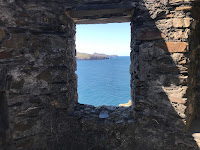 The origins and purpose of the tower are unknown. It's possible it was a sort of pilot house, but more likely a folly for the quarry owner's pleasure. Built of fieldstone, it has windows which frame the views and a fireplace that once kept the occupants warm. What a writing shed it would have made! Perhaps the wife of the quarry owner came here to paint or to crochet? Maybe his children used it for nineteenth-century sleepovers... or picnics... or like me, simply to watch the sea, quietly, alone. 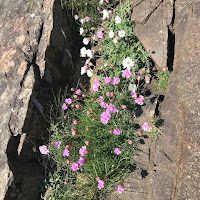 Except for Oscar of course, who'd been in two minds about the headland scramble and was now eyeing the gulls with an intent that confirmed he was staying on the lead.  We settled down on the rocks, warming our backs in the sun, thrifts and campions flowering for the first time this year. How different this place must have been when it sounded with blasts and sirens, the clatter of trucks and hammering of picks on stone. The quarrymen's cottages were abandoned after its closure and later washed away in a storm. If you look carefully you can still see the old fire grates... ashes to ashes, dust to dust...

Heading back to the path I stopped to tie my laces. The car park by the beach was almost full, a line of walkers making their way to the lagoon. Two boys were jumping into the gelid pool below me, their friends cheering from the shore. A girl in a wetsuit was donning a swim cap for a 'wild' dip in the water. I smiled. It's good to see folks back I thought; it felt hopeful—and appropriate for a place that thrives on renewal. 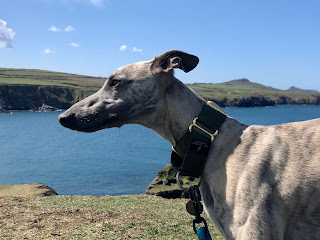 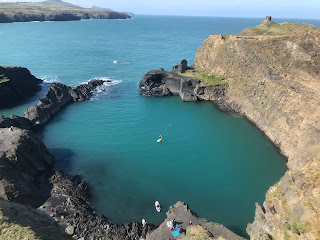