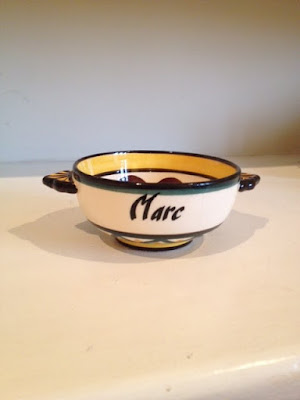 Somewhere, among the stacked assemblage of boxes in my new garage, is a small faience bowl, marked (allowing for incorrect spelling) with my Christian name, and given to me as a gift when I was two years old.  My Great Aunt, on a tour of Europe and trip home from Australia, brought one for me and another for my elder brother.

I don't remember her visit, but I know I must have been a toddler because my younger brother hadn't yet arrived. This explained why, for all my childhood, only two bowls were displayed in the drawing room cabinet. And why also, when peering through the glass, I felt such great fortune that I was born in the nick of time to be given this valuable and mysterious treasure...

Such are the delusions of youth.

Quite why I still have the bowl, is part mystery too. Most probably I asked my mother for it during one of her clear outs or house moves, but in truth, I can't remember. Whatever, it has been with me for thirty years and a half-dozen moves of my own. As far as I'm aware, it's the object that I've owned longer than any other.

The odd thing, in my keeping it, is that I otherwise dislike French faience. The designs remind me of the worst on offer in craft fairs, and the figurative illustrations have a Protestant dourness, despite their gaudy colours. Even to describe the bowl as faience is probably incorrect.  My Aunt had certainly travelled through Brittany, and perhaps visited the famous Quimper potteries, but the bowl is not stamped with their mark - souvenir stall trinket is more its likely provenance. 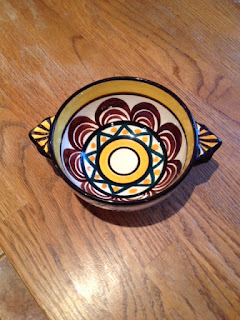 Perhaps that is why I make an exception for this particular example - it could sit as comfortably among my collection of kitsch as it did in my parent's china cabinet. Though paradoxically, I am still reluctant to use it, for fear of chipping an edge.

And it seems to me that our lives are a little like that. We surround ourselves with friends and objects that aren't rationally chosen or related to; but rather, they're a mash-up of chance and situation and memory (usually flawed) - and sometimes just a plain persistence of presence.

The objects we chose to treasure, perhaps because they don't change while we do, acquire a value which transcends objectivity - they root and remind us of where we are from and, in a curious way, help us adapt to the new. They become as much a part of ourselves and our sense of belonging as are the towns and houses we chose to call home.

Which perhaps explains, why the top of my list of New Year jobs, is a note to unpack those boxes in the garage.
Posted by The bike shed at 1:10 PM