Writing and other art 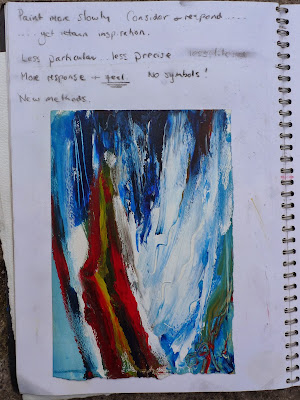 Notes in a sketchbook

A few weeks ago a friend of mine asked my view on the difference between writing and other art forms - in terms of producing and receiving it.  It's a vast question, and not one I can hope to answer fully, but yesterday's post of old paintings reminded me of the request, so I thought I'd offer some potted wisdom.

Of course, it all depends on what you mean by art - so let's get that out of the way.

To me, art's defining characteristic is that it is both a 'response' to the world and an attempt to communicate beyond our everyday senses. This is different to 'craft', which however skilful, is the result of a predetermined process. The making of exquisite furniture or quilts or Faberge eggs is not to my mind art - though crude children's drawings often are!

This notion of 'art as response' and art as 'communication beyond the literal' is important - for different forms, necessarily approach it in different ways.

Painting, as my tutor used to say, is the silent language of marks - all true painting shows a 'control of' and 'response to' the chosen medium. Anyone who has painted for even a short time will have experienced the shifting relationship between artist, medium and image - and understand that the outcome is never certain. This applies to figurative as well as abstract painting, though to the layman it is perhaps more obviously so in the later.  That painting is occasionally used as therapy, is testament to its ability to create connections and resolutions which we struggle to 'put into words'.

Music I can say the least about with any authority, but it seems to me there is a huge artistic difference between interpretive music and original composition - not dissimilar to the distinction I made between craft and art. Unlike traditional notions of painting, we have an intuitive expectation that music will not simply replicate the sounds we could hear in the natural world -  rather, it will reinterpret those experiences and in so doing, heighten our experience it.

The philosopher Brain Magee argued that classical music was the most powerful of art forms precisely because it was the most disconnected from the physical world. I don't share his conclusion, but I agree that music's strength is we tend to approach it with less need for 'literal' explanation.

The Ancient Greeks considered writing and drama to be the greatest of the arts. I'm not sure these hierarchies are relevant, but I do understand that writing has a capacity to involve the recipient in a way which is different to other forms. The very first thing we learn as writers is to 'show not tell' - in a sense, to let the reader be part of the outcome. Words are also less fixed than we might imagine - anyone who writes a lot will know how ideas 'happen' on the page.

It seems to me that writing's great strength is that it uses the language we all understand - this makes it accessible and perhaps the most outwardly literal of the arts. The corresponding weakness is that often we can't find the words; that we resort to cliche - and that because of its very literality (is that a word?) we hold back on the truth.

To some, much of this will sound like gobbledygook. A good friend of mine would surely say, painting is about likeness, music is about tunes and writing is about telling tales - end of story!

I believe he'd be wrong.

But I can't prove it -  I can only suggest that experiencing the process is the best way to understand.

When you next have a quiet moment, think for a second or two of how you'd paint the taste of ice cream; of making music in response to a scent; or writing a poem about love.
Posted by The bike shed at 8:22 PM